Russia, China or Iran vs. US Navy: Who Wins? (A Sea Control Showdown) 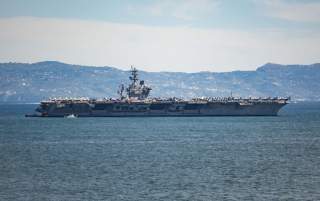 The capability risks that the United States Navy took in the immediate aftermath of the Cold War are coming back to haunt the service as Russia, China and Iran seek to challenge American forces at sea. Increasingly, rival powers are challenging American sea control—something that the U.S. Navy has not encountered since the implosion of the once mighty Soviet Navy in 1991.

“Their operational approach, Russia, China, Iran certainly, is to deny us sea control,” Admiral Philip S. Davidson, commander of U.S. Navy Fleet Forces Command told an audience at the Center for Strategic and International Studies in Washington, D.C., on June 24. “It’s to let us know the last decade—that aberration—that we would not go unchallenged in the maritime domain. That is one of the areas in which we took risk in the last decade.”

The United States Navy also took risks in electronic warfare, anti-submarine warfare, over-the-horizon targeting and strike in order to conduct the various other tasks assigned to it. “So we have to restore those skills to the fleet,” Davidson said.

But while the U.S. Navy has to restore its capabilities to fight a war at sea, the service has some built-in advantages that it has invested in over the past decade. Chief among those is the Naval Integrated Fire Control battle network that allows the service aircraft, ships and other assets to share information and targeting data—and to act as a coherent whole. Moreover, NIFC allows the service to distribute its firepower among a much wider number of platforms—which is a huge advantage. “That capability has revealed itself over the last 15 years with ballistic missile defense,” Davidson said. “The whole is greater than the sum of its parts.”

Another major advantage is the Navy’s dominance of the underwater domain. While the Navy’s attack submarine fleet is woefully short on boats, the service’s Virginia and Seawolf-class vessels are the most advanced in the world—though the Russians, albeit lacking in numbers, are not very far behind. Moreover, the Navy has a host of other sensors and processing capabilities to maintain awareness. And, according to the Admiral, the potential exists to link submarine into an integrated fire control network. “It’s our ability to exploit the undersea domain and to dominate the undersea domain,” Davidson said. “That’s not to say it’s all about submarines, it’s also about our ability to sense, do big data processing and exploit the undersea domain.”

The U.S. Navy’s forces are also inherently modular—the service can mix and match its forces as needed for a particular task. The carrier air wing, for example, has changed over the past 15 years and will be reconfigured in the future as new threats arise, Davidson said. On the surface, the vertical launch tubes and mission bays afford warships like the Arleigh Burke-class destroyer and the Littoral Combat Ship flexibility, he added. Indeed, the mission bays on the LCS will afford the Navy the ability to deploy unmanned systems, he said.

Thus, while the Navy has to work to regain its high-end warfighting skills, the underlying potential is still there.