Russia and China: Planning to Build Aircraft Carriers Together? 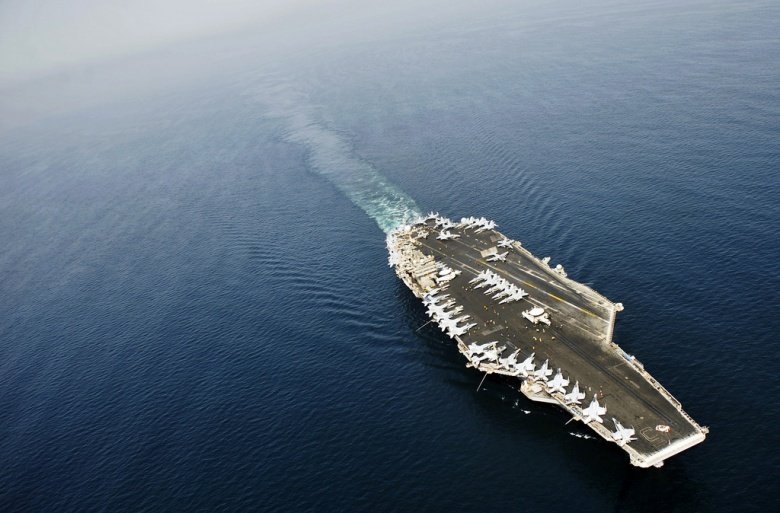 Could Beijing and Moscow’s budding friendship be moving towards the joint development of some of the most sophisticated types of naval vessels on the planet?

A recent report may indicate that China and Russia might be considering a big leap in military cooperation: the possibility of jointly developing an aircraft carrier.

Such an idea was raised in a recent piece in the Wall Street Journal near the very end of an article detailing Moscow’s struggles to develop advanced military hardware thanks to economic challenges.

The piece states specifically, “Russia has touted what it calls a strategic alliance with China, which may develop into plans to build a joint aircraft carrier.”

The articles continues, explaining that:

“A defense industry official, however, said China is raising its demands, and wants a controlling stake in the project.

‘We both tout the benefits of our friendship,’ the official said. ‘But the truth is, the Chinese are playing hardball.’”

With Russia now on the cusp of finally selling China the advanced Su-35 fighter, could both sides now be contemplating co-development of what some see as the ultimate weapon on the high-seas?

Reasons For and Against:

There are a number of reasons why Moscow and Beijing may, or may not, go for such a deal:

The reasons why Moscow would avoid such a partnership are straightforward.

First, Russia might simply not have the money for such a financially draining endeavor. Modern aircraft carriers cost billions of dollars to design, test and manufacture. Such a possibility seems silly when one considers that Moscow is struggling to modernize its military with other expensive pieces of hardware in the face of economic sanctions and sagging oil prices.

Conversely, Russia might be tempted into such a partnership if China was willing to help finance and develop Moscow’s efforts to create a new supercarrier. Such a carrier, widely reported in the press, would easily cost billions of dollars to create and could drain Russia’s military budget. But if Beijing was willing to pony up much of the costs, with Moscow willing to share the technology, it could prove to be quite tempting.

However, would Russia really want to give even more advanced military technology to China that could someday be used against them if relations with Beijing were to sour?

Beijing could be swayed to work with Russia on a carrier project for a number of different reasons.

Aircraft Carrier development for China has been a top priority for several decades. As I noted back in 2011:

“Back in 1985, China purchased the World War II era Australian carrier HMAS Melbourne for a disposal fee, only to halt its break up for several years to study its design. The Chinese also purchased three Soviet era carriers in the 1990’s from Russia and the Ukraine: the Kiev, Minsk and Varyag. The Kiev and Minsk were indeed eventually turned into amusement parks. However, the Chinese studied both carriers carefully in their ongoing efforts to develop carrier technology. While both carriers possessed nowhere near the capabilities of modern US nuclear carriers, any secrets or technology the Chinese could learn on the cheap would have proved useful for later vessels. Spending millions initially instead of billions later so they could learn from others’ successes and failures would only have benefitted Chinese military planners and speeded up their efforts.”

But Beijing’s efforts did not stop there:

“...The Varyag, the most famous of their ‘casino’ acquisitions, was purchased [from Ukraine] in March 1998 for $20 million dollars. The Chinese company that purchased the vessel had strong ties to the Chinese military, and the then Varyag would become trapped in limbo for over 15 months. Turkish officials wouldn’t allow the carrier to move through the Dardanelles, citing a long-standing rule of not allowing carriers passage through the straits.  It has been rumoured that China then offered Turkey more than $360 million dollars in a nicely crafted ‘tourism and economic aid package’ to allow the passage of the presumed floating casino."

But the Varyag never was kitted out with slot machines or craps tables [to turn the carrier into a floating casino,as was the supposed reason for the sale]. Instead, the Soviet era carrier was completely stripped down and recreated into a more modern aircraft carrier.”

To this day, China has only the rebuilt former Varyag, now rechristened Liaoning, to show despite all its years of effort. Even if China were to build multiple carriers, with Russia or on its own, one must remember that a carrier is not a stand-alone weapons platform. One must protect the carrier with assets that can ward off submarines, missiles and other forms of military power that could sink the floating airfield—costing additional billions more. At a time when the Chinese economy is starting to sour, would Beijing want to throw billions of dollars into such a project?

Is the Age of the Carrier Over?

There could be an even more powerful reason that a Sino-Russo carrier development project never gets off the ground: the march of technology.

As we have seen from China itself, many nations have developed weaponry specifically targeting aircraft carriers. While various types of missile platforms have been around for decades that have challenged the carrier’s dominance, their proliferation to many countries around the world—and in larger numbers—could certainly be an argument for Beijing and Moscow to spend their money elsewhere.

As Jerry Hendrix noted in a report for the Center for a New American Security (CNAS) back in 2013 when talking about China’s DF-21D, or "carrier-killer" and the threat it posed to U.S. carriers:

“Using a maneuverable reentry vehicle (MaRV) placed on a CSS-5 missile, China’s Second Artillery Division states that its doctrine will be to saturate a target with multiple warheads and multiple axis attacks…”

So the question seems quite simple: Why would China place billions of dollars into carriers with Russia or even on its own when it is working to undermine the military utility of such a weapons platform in the first place?

Call me skeptical, but I don’t think we are going to see Xi Jinping and Vladimir Putin standing dockside glouting over a jointly developed aircraft carrier anytime soon. While both nations have many areas in which to strengthen cooperation, carriers aren’t likely to be one of them.