Russia Could Fly 96 Sorties a Day over Syria 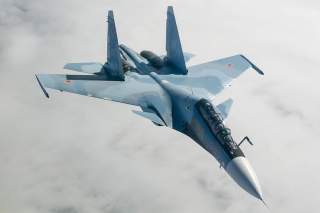 The Russian expeditionary force in Syria could generate as many as ninety-six fixed-wing combat aircraft sorties per day, assuming they have well-oiled logistics and properly trained maintenance crews. But that is a best-case scenario during a “combat surge”; more realistically, the thirty-two Russian jets at Latakia might be able to generate only twenty sorties per day.

“With thirty-two on the ramp, I think they'll probably be able to fly twenty-four jets per day,” one recently retired U.S. Air Force fighter pilot told me. “Depending on sortie duration and whether they're flying at night, they may get between two and four sorties per jet, per day. So I think the range is probably between forty-eight and ninety-six sorties per day.”

But while the Russians might be able to generate as many as ninety-six sorties in a day during a surge, they might not be able to sustain that pace for long. “Whether or not they'll be able to sustain a pace like that will be interesting to watch,” stated the retired fighter pilot.

Another current U.S. Air Force official agreed with the assessment. “That's about right,” the second Air Force official said. “There are a lot of variables though—number of aircrew and maintainers, aerial refueling, distance from airfield to target and the amount of intel on deliberate targets. Some could be flying on-call CAPs [combat air patrols] waiting for targets and flying longer missions while others takeoff on deliberate missions where they take off with pre-designated targets.”

But other U.S. Air Force officials are dubious—given the Russians’ relatively anemic logistical train and the diverse types of aircraft that they have fielded. “I think those numbers are really optimistic,” said a third senior U.S. Air Force official. “If I had thirty-two airplanes and they were all different I think we could—with good logistics—get a four-turn-four from the Su-24s, a four-turn-four from the Su-25s, and two-turn-twos from the Su-30s and Su-34s…. So that’s twenty-four sorties a day.”

Moreover, the Russian aircraft have not been observed flying at night—which cuts down on their sortie generation rate. That has led other Air Force and Marine officials to conclude that the Russians might be flying as few as 20 twenty sorties per day—mostly in pairs and with sporadic support from the four air superiority oriented Su-30SM Flankers. Only some Russian aircraft have been observed carrying KAB-500 satellite-guided bombs or Kh-29 laser-guided missiles. That means that most Russian aircraft have to flying during the day when dropping unguided munitions. “I don’t see them flying at night especially since they’re dropping dumb bombs,” the third official said.

However, the Su-25s might be able generate more sorties than the other aircraft types present at Latakia because they operate differently from typical fighter aircraft. “The Frogfoot would have a whole different operating construct – shorter sorties and ordnance loading requirements,” said a fourth senior U.S. Air Force official. “Perhaps seventy-five percent tail availability, three sorties per day is reasonable.”

U.S. forces are typically able to maintain about seventy percent mission availability during combat surges—but the Russians are not likely to be able to match that. One U.S. Air Force commander said that he was able to keep four F-15C Eagles aloft twenty-four hours a day with twelve deployed aircraft during Operation Iraqi Freedom. The F-15Cs had to fly for six hours per day during those sorties. “With hard work and good logistics, this was comfortable,” the U.S. Air Force official said. “Can the Russians do that? I don't know – their jets are rugged, but like I said, I'm skeptical about logistics.”

U.S. Navy officials offered similar assessments. “We recently took seven top-of-the-line Super Hornets to [Naval Air Station] Fallon [Nevada] for a det,” a senior naval aviator said. “You can safely assuming that a part of the time the seventh jet will be undergoing maintenance, so I suspect the Russians have eight to ten [out of each 12 aircraft detachment of Su-24s and Su-25s] available at any time.”

Like the Air Force officials, U.S. Navy officials questioned how many sorties the Russian forces would be able to fly. “We also flew a five-turn-five-turn-five schedule for fifteen sorties a day,” the naval aviator said. “This was relatively aggressive from a resource standpoint. We’re talking jets, but how many pilots did they bring? What is their maintenance footprint?”

The problem for the Russians is that they have not deployed overseas since the collapse of the Soviet Union. “Russian logistics will probably be the long pole in the tent,” the fourth Air Force official said. It’s a problem further compounded by Russia’s use of conscript troops rather than professionals. “They are not used to this like we are. Our maintainers are smart… Not conscripts. They’re motivated and they know the business well,” the third official said. “I don’t think the Russians are dumb, but they’re not Americans.”

The difficulty in gauging the Russians’ sortie generation capability is complex because there are a lot of unknowns. Factors like maintenance efficiency, fuel and weapons availability, parts logistics reach back, and general pilot and maintainer proficiency during surge operations are just a few of the factors that can have a drastic effect impact on sortie generation. The U.S. Air Force has developed its methods after a lot of trial and error—and a lot of practice. “The USAF has a complex method of ensuring it has enough jets and pilots to maintain surge operations, and it relies on bringing enough of these things together in sufficient quantity with well trained operators to implement them,” said a fifth Air Force official. “That's what makes us so good. The synergy between man and machine to endure for the long haul.”