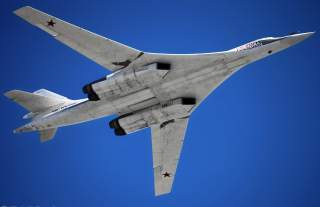 Russia is developing a new long-range unmanned supersonic strike aircraft that would be capable of hitting both mobile and stationary targets. Unlike comparable Western developments that rely on stealth, the Russians are—at least for this particular project—planning on using a combination of low altitude and supersonic speeds to defeat enemy air defenses.

“The new UAV [unmanned aerial vehicle] will be able to perform automatic low-altitude flight at supersonic speeds and hit both stationary and mobile targets at a considerable distance from the takeoff site,” reads a Russian language report from state-owned RIA Novosti, which cites Alexander Nemov, deputy head of research for the Central Research Institute of the Air Force.

Low-level penetration is a tried and true method of penetrating enemy air defenses without incurring the added cost of stealth.

“This is supposed to be a low-flying supersonic craft—it is notoriously difficult to shoot down a projectile flying at low altitudes and at high speeds,” Sam Bendett, a researcher at the Center for Naval Analyses, told The National Interest. “So this UCAV is aiming to penetrate anti-aircraft defenses and to generally punch through existing radar and missile coverage.”

However, while this particular Russian aircraft is being designed to be stealthy, Moscow is not abandoning low observable technology.

“There are plans to develop stealth UAVs and UCAVs,” Bendett said. “This development is not tied into any other but reflects a Russian line of thinking about future warfare where taking out an adversary’s defenses and C2 [command and control] targets deep in its territory is essential in conjunction with a sustained defense/offense with or against precision-guided munitions.”

It is not clear how the Russians intend to control the new UCAV inside heavily defended airspace—especially where there is a lot of enemy jamming or cyber activity.

“We don’t know yet,” Bendett said. “It’s too early to consider autonomous control although Russian designers are definitely looking at ways that their UAVs can operate autonomously and in swarms. If anything, it will probably be protected against jamming or electronic interference—Russian designers are claiming to have developed drones that are ‘unhackable’ to adversaries, like a Kalashnikov small-sized Zala drone.”

It is not clear when this new Russian supersonic UCAV will become operational.

“Completion deadlines tend to slide to the right,” Bendett said. “This UAV is still ‘in development’ so we might guess that a prototype can be unveiled next year and a flying concept could be unveiled by 2020, if not later. Or Russia can surprise everyone and unveil a prototype during the upcoming Army-2018 expo in August, or at MAKS airshow this summer.”

In some ways, this new Russian development is an answer to U.S. developed medium altitude long endurance and high altitude long endurance drones that have dominated the market. “This supersonic UCAV is presumably developed to act beyond Russian borders—an answer of sorts to the American line of MALE/HALE UAVs that until recently have ruled the skies worldwide,” Bendett said.

For the United States, the Pentagon will have to continue investing in air defense systems that might be able to engage systems such as this new drone.

“We will have to continue to strengthen our A2/AD defenses and technologies, especially early warning and space-based systems,” Bendett said.