Is Russia Getting Ready to Build a Massive Nuclear-Powered Aircraft Carrier? 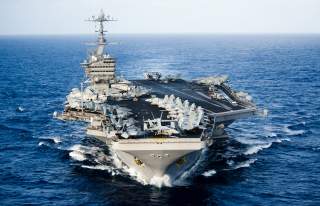 If built, the massive vessel would be comparable in size and capability to one of the U.S. Navy’s Nimitz or Ford-class super carriers. The Russian Ministry of Defense  (MOD) has no real interest in the project; nonetheless Krylov is attempting to convince a reluctant Russian Navy to buy one of the massive vessels. Moreover, the company hopes to convince a foreign customer—most probably India—to buy such a ship.

“Despite active interest in the project, there have not been proposals from our government client—the Russian Defense Ministry—or foreign partners,” Vladimir Pepeliaev, Krylov’s chief of planning told the Interfax news agency.

The company has also started concept development work on a smaller carrier that would be less costly, Pepeliaev told Interfax. Pepeliaev also told the news agency that Russia has the technical capability to build the massive 95,000-ton nuclear-powered carriers at the Sevmash yards on the White Sea near Severodvinsk. Pepeliaev noted that the massive shipyard had previously refurbished the former Soviet carrier Admiral Gorshkov into INS Vikramaditya for the Indian Navy. Nonetheless, post-Soviet Russia has never built a new aircraft carrier—all previous Soviet-era flattops were built at the Nikolayev shipyards in what is now an independent Ukraine.

Both American and Russian defense analysts are skeptical about Krylov’s prospects for building or exporting a carrier based on the Storm design.

“No, it's not feasible, neither from a technical nor from a financial point of view,” Dmitry Gorenburg, a senior research scientist specializing in Russian military affairs at the Center for Naval Analyses told The National Interest.

“The key part of this story comes early on, when the interviewee notes that the MOD has not expressed any interest in this project. In other words, they are trying to get someone to pay attention to their nifty design, but the Russian military doesn't want it.”

“Of course it will not be built,” Russian defense analyst Vasily Kashin at Moscow’s Higher School of Economics (HSE) told The National Interest. “The Russian Navy has a huge problem of replacing the limited number of Project 1155 and 956 destroyers it still operates. In such a situation, any fantasies about carriers are not realistic.”

As a Eurasian landpower, aircraft carriers are of limited military value for Russia. The giant vessels primarily serve as a symbol of the Kremlin’s great power status—as the Russian Navy has done since the time of Peter the Great.

“It's just a status symbol with no practical missions,” Michael Kofman, a fellow at the Wilson Center’s Kennan Institute and specialist on Russian military affairs, told The National Interest.

Nor is Krylov likely to be able to successfully entice potential foreign customers such as India to buy the Storm. Gorenburg said that New Delhi has likely not forgotten its unhappy experience with Vikramaditya’s refurbishment. Moreover, it is likely that it would take Russia quite some time before it could even begin to start work on a vessel of the size of the Storm. “I think that it would take at least five years to prepare the facilities for constructing a carrier at Sevmash before work on the carrier itself could begin,” Gorenburg said.

Kashin, for his part, said that New Delhi would—in all probability—built its own future aircraft carriers rather than rely on Russian shipyards. “The Indians will try to build their next ships indigenously,” Kashin said.

As such, the Storm is likely to remain a paper project for the foreseeable future. But eventually, Russia might consider building a replacement for the long-serving Admiral Kuznetsov—Moscow’s sole remaining carrier. However, such a decision could be years or even decades away.

“I don't think that carrier is a problem to be thinking about for at least 15-20 years,” Kofman said.

If and when Russia does decide to build a new carrier—and the Kremlin can afford to pay for it—it could draw on the Storm concept, but by then the design could be obsolete. Only time will tell.