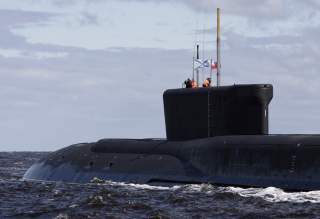 More details are emerging about Russia’s forthcoming Project 955 Borei-B class nuclear-powered ballistic missile submarines. Design work on the new Borei variant will start this year and the first vessel is expected to be handed over to the Russian government in 2026.

"The Project-B project has been included in the state armament program through 2027. In compliance with this program, the R&D work on developing the lead underwater missile-carrying cruiser should begin in 2018 and its delivery to the fleet after trials is scheduled for 2026," a Russian defense industry source told the TASS news agency.

While there are very few details available, the Russian language version of the TASS article suggests that the new vessel will start construction in 2023. It will retain the same basic hull form as the current Project 955A design, but will incorporate a new pump-jet propulsor and a host of other refinements to increase the vessels’ stealth. At least four of the new Borei-Bs will be built according to TASS’ source.

Analysts say that the Russian plan to build a new Borei variant does make logical sense. “Borei-B is simply an evolution of Borei-A,” Michael Kofman, a research scientist specializing in Russian military affairs at the Center for Naval Analysis, told The National Interest. “The current package of Borei SSBNs is scheduled to be completed by 2021, which of course is too optimistic, but 2023 is possible. By then they will have both the free shipyard capacity and need for additional work, so a newer variant of the Borei makes sense.”

Indeed, Russia might have a need for additional ballistic missile submarine as the old Soviet-era Delta-class boomers are nearing the end of their operational lives. “The Delta IIIs, for sure, have to go, and Delta IV by the end of the 2020s,” Kofman said. “How many they actually build will depend in great deal on the state of arms control agreements and overall composition of Russian nuclear forces.”

The overall future composition of Russian nuclear forces is not yet clear. “We do not yet know how many warheads [the new] Sarmat [heavy liquid-fuelled intercontinental ballistic missile] will deploy for example, whether they will be able to make an additional 50 Tu-160M2 bombers and so on,” Kofman noted.

What is increasingly clear is that Russia’s fifth-generation Husky-class ballistic missile submarine variant is unlikely to be built. Instead, the Moscow is more likely to focus on developing the attack and cruise missile carrying versions of that vessel.

“The Husky project was first and foremost about building a cheaper Yasen-class, and a quick to produce SSN,” Kofman said. “The SSBN variant was always unlikely and did not make sense given these submarines come out of different design bureaus.”

Indeed, at the end of the day, the entire Husky program is more of exercise in developing a new submarine than a real vessel at the moment. “Husky is not a submarine it is a design project and I don’t think it has anything to do with SSBNs,” Kofman said. “Even though that has been written, it does not make any sense because Rubin makes SSBNs and Malachit makes SSNs.”

Thus, in the immediate future, the Borei-class will constitute the backbone of the Russian ballistic missile submarine fleet.