Is Russia Getting Ready to Send 120 Additional Combat Aircraft to Syria? 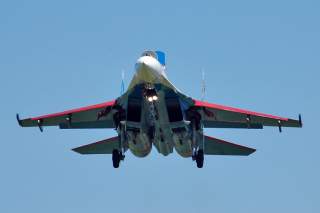 The Russian military appears to be gearing up to expand its operations in Syria according to multiple reports. In fact, some unconfirmed reports suggest that Russia might deploy as many as 120 additional combat aircraft to the region, but Moscow has not publically stated any intention to do so thus far.

“The Russians are operating helicopters out of Shayrat airport, but they are making [preparations] to land fixed-wing aircraft,” a U.S. official told Fox News. In total, the Russian forces in Syria are operating out of four bases including Hmeymim, Hama and Tiyas. The bases at Hama and Tiyas are primarily used to support attack helicopters like the Mi-24 Hind—but some reports indicate that the Kamov Ka-52 and Mil Mi-28 are also present in theatre.

According to the British, the new base at Shayrat—which is nearing completion—will boast forty-five hardened aircraft shelters. “It also has a main runway and a three-kilometre backup runway that engineering teams are working to prepare,” a British defense official told the Express. The Times of London also reported that the Russian forces are expanding their presence in the region but added that the Moscow could deploy as many as 100 additional combat aircraft to Syria.

Additionally, the Times report—which cites anonymous sources—suggests that Russia is also moving additional artillery including the TOS 1 multiple launch rocket system to its bases in the region. The deployment of the TOS-1—which is a modified T-72 tank chassis designed to carry twenty-four launch tubes— is an indication that Russia might be using thermobaric or fuel air explosives against its enemies in the area. The TOS-1’s 220mm rockets are usually fitted with a powerful thermobaric charge and was used to devastating effect during urban combat operations in Chechnya.

Meanwhile, there were already some indications that Russia was planning on expanding its air campaign following the downing own of its Sukhoi Su-24 Fencer bombers last week by Turkey. The Russian military immediately responded by deploying S-400 and S-300 air defenses systems to Syria. It also started to equip every air-to-air capable aircraft it had available with air intercept weapons. Further, the Russian military announced that fighters would escort every strike aircraft. As such a dozen additional Sukhoi Su-30SM or Su-27SM3 Flankers are being readied for deployment to Syria.

Thus far the Russian ministry of defense has not confirmed that it intends to deploy any additional jets. But deploying 100 or more additional combat aircraft to Syria is likely going to strain the Russian air force and its logistics to its limits. But Russia does retain a very significant air force that it inherited from the Soviet Union, and it remains to be seen just how far Moscow is willing to go to protect its interests in Syria. Only time will tell.