Russia Has a Crazy Fast Torpedo That Seems Unstoppable 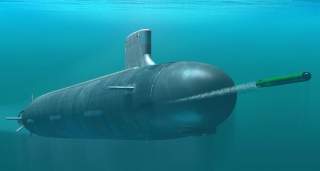 A new superfast Russian torpedo may tip the scales decisively in underwater warfare.

It is a successor to the 1970’s Shkval (Russian for ‘Squall’), which has an impressive speed of over 200 knots, far faster than any NATO torpedo, making it difficult to stop. However, it has range of less than ten miles compared to more than 30 for the US Mk 48. Shkval is also limited by the fact that it cannot use sonar guidance when travelling at speed. Western analysts have tended to be scathing about the Shkval, calling it a suicide weapon because of its short range. One Russian commentator described it as ‘amusing but useless’.

However, a new Russian torpedo is likely to see the Shkval’s defects remedied. The Khishchnik ("Predator") is a new supercavitating torpedo at an advanced stage of development. Unlike various supposed superweapons which they boast about publicly, the Russians are keeping very quiet about Predator.

High-speed underwater projectiles rely on a principle called supercavitation. Rather than being streamlined, Shkval’s nose is blunt, ending in a flat disc. This creates a low-pressure area in its wake – the pressure is so low that a bubble of water vapor forms. This cavitation effect is well known; propellers are designed to minimize it because it reduces contact with the water and causes damage. In supercavitation, the bubble is large enough to enclose the entire torpedo except for its steering fins. By travelling inside the bubble, the torpedo experiences far less drag than a normal torpedo in contact with the water. The low drag means it can reach phenomenal speeds.

Russia has long been the leader in supercavitating weapons. These include the bullets fired by the APS underwater assault rifle, effective at a range of thirty meters underwater – several times greater than any other firearm.

Torpedoes like Shkval use a more advanced version of the effect in which the cavity is ‘ventilated,’ sustained by an injection of exhaust gases. Shkval is not rocket-propelled as many sources assume; there’s a good description (in Russian) here. A rocket boosts the torpedo up to cavitation speed, but after that a hydrojet takes over, burning magnesium-based fuel and using seawater as the oxidizer.

Western efforts to copy Russian supercavitating technology have not so far been successful. There have been great successes in the lab, but these have not translated into deployed hardware.  DARPA had an ambitious plan for a 100 mph+ supercavitating submarine called the Underwater Express. They had a three-year contact with sub makers Electric Boat from 2006-2009, but it came to nothing.  The US Navy RAMICS project involved busting underwater mines with a supsercavitating projectile fired from a helicopter, the project ran from 1997 to 2011 before funding was terminated without the system being fielded. The US Navy’s supercavitating torpedo project has been on hold since 2012; a spokesman says that improved understanding of the basic physics of supercavitation is needed.

The Western work may give us some insight into how the Russians are improving on Shkval. The reason why it cannot carry sonar is because the cavitating disc is much too small for a sonar system, and the engine is too noisy. General Dynamics patented a new type of cavitator in the early 2000’s. Rather than being flat, this is a parabolic curve, giving gives enough surface area for the sonar receiver. In the GD design the sonar emitters are mounted separately on the fin tips, and filters block out engine noise.

This suggests that a guided supercavitating torpedo is now feasible; a 2015 article on the Shkval suggested that one was under development.

The other issue with the Shkval is its short range.  Georgiy Savchenko of the Institute of Hydromechanics at Ukraine’s National Academy of Sciences works on supercavitating designs and says that improved fuel will make a dramatic difference – he estimates that the range could be improved by a factor of ten.

Khishchnik may also be significantly faster than the 1970s Shkval. Very high speeds underwater are certainly possible. A US Navy lab succeeded in firing an underwater projectile at an incredible 1500 meters per second, and the Chinese have talked about supersonic underwater vehicles, though there is no evidence they have achieved this.

Very little information is being released on Khishchnik apart from the fact that it is being developed by Elektropribor, a design bureau which makes instruments for ships and subs as well as aviation components. Its existence was revealed in documents uncovered by Russian defense blog BMPD which revealed that the company had been working on Khishchnik since 2013 and that launch tests were expected in 2016 as part of a contract worth 3 billion roubles ($53m).  There have been no official comments or announcements.

Other companies may also be working on the project. In 2016, Boris Obnosov, CEO of Russian company Tactical Missiles Corp, mentioned work in this area to Rambler News Service

“Take for instance the well-known unique Shkval underwater missile. We are working on upgrading it heavily.”

The ‘heavily upgraded’ Shkval seems likely to be the Khishchnik.

Shkval has been upgraded several times previously, with improvements in range and guidance. A new name suggests a more significant upgrade. An export version of the Shkval, the Shkval-E was produced in 1999. There would be a big market for an unstoppable, carrier-killing torpedo.

David Hambling is a special contributor to Scout Warrior (where this first appeared). He has authored several books, including Swarm Troopers: How Small Drones Will Conquer the World and Weapons Grade: How Modern Warfare Gave Birth to Our High-Tech World.