Russia Has a Deadly Plan to Defend the Black Sea 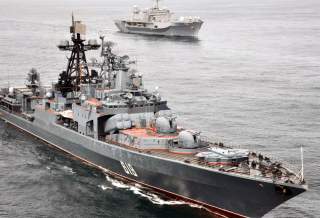 The progressive “littoralization” and the “kalibrization” of the Black Sea Fleet reflects, at a smaller scale, the overall limits of the Russian surface navy. There are no plans to update high sea capabilities and the 2018–2027 armament program is instead exploring the possibility of building “Super Gorshkov” frigates (Project 22350M) and heavy missiles corvettes (Project 20386). Considering that Russia’s core interests lie in the former Soviet space, there is no need to build a costly new blue-water navy. Moscow could not afford such a fleet and Russian shipyards would not be up to the task. In the Black Sea, Russia will aim to retain a comparative advantage against potentially hostile navies by accounting for the terms of the Montreux Convention, fortifying Crimea and building its fleet around Kalibr.

Dr. Igor Delanoë is Deputy-Head of the French-Russian Analytical Center Observo (Moscow, French-Russian Chamber of Commerce). He holds a PhD in History (University of Nice-Sophia Antipolis, France). His primary areas of research interest concern Russian defense and foreign policy issues, Russia interests in the Mediterranean and in the Middle East, as well as the geopolitics of the Black Sea region. He is a Research Associate at the Center for International and European Studies (Kadir Has University, Istanbul) and at the University of Nice-Sophia Antipolis.