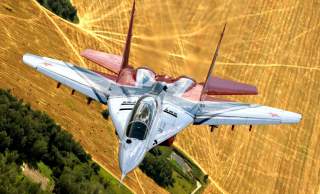 Russia will partner with the United Arab Emirates to jointly develop a new lightweight fifth-generation fighter in roughly the same class as the Mikoyan MiG-29 Fulcrum.

"We’ve signed an agreement on industrial cooperation in the field of military engineering,” Denis Manturov, Russia’s Minister of Industry and Trade, told the Moscow-based TASS news agency. “This will enable us to push ahead with the fifth-generation-jet project, in which the UAE will participate.”

The joint development plan with the UAE is in its infancy, but it is clear that the Russian side will carry out most of the substantive development work. Indeed, foreign professionals perform overwhelming per bulk of high-skill work in the UAE.

"Joint work on a light fifth-generation jet with the UAE is in the initial phase,” Yuri Slyusar, head of the United Aircraft Corporation told TASS. “We are working on proposals addressed to the UAE. We believe it will be a good plane. We are prepared to present the results of our R&D efforts to our counterparts.”

It’s not clear what the final configuration of the new fifth-generation aircraft will look like. Indeed, Russian sources offered conflicting information about the project. While Rostec chief Sergei Chemezov told TASS’ Russian-language service that the new fighter would be developed from the Soviet-era MiG-29 Fulcrum, Slyusar said that no decisions had been made on the configuration of the new jet.

"The more modern fifth generation aircraft will be created on the basis of the MiG-29" Chemezov told TASS. “Work on this aircraft, I think, will begin next year. It will take about seven or eight years.”

Slyusar, however, said that the while both Sukhoi and Mikoyan will contribute to the project, no decision has been made on the final configuration. "We have not formulated the concept of a fifth-generation jet so far,” Slyusar said. “We are still undecided if it is going to be a single-engine or twin-engine plane. The agreement signed enables us to start that work."

It’s likely that Chemezov meant that the new aircraft would be a replacement for the Fulcrum series rather than a derivative. The RSK-MiG—which along with Sukhoi is part of the United Aircraft Corporation—is already working on a privately funded venture to develop a fifth-generation MiG-29 replacement. It is likely this Russian joint venture with the UAE is part of the same project.