Russia Has a Plan to Dominate the Arctic 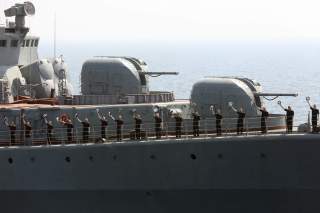 In a move with chilling implications for the international competition for Arctic sea routes and minerals, Russia is building more nuclear-powered icebreakers.

"Rosatom [state civilian nuclear power corporation] has now been instructed as part of private and state partnership to think over the algorithm of financing three icebreakers rather than one and then we will make navigable the entire Northern Sea Route," Rogozin said in an interview with Russian television.

The three icebreakers will join three current-generation icebreakers—the Arktika, Ural and Sibir—scheduled to be commissioned in 2019–2021, "will help ensure an all-out escort [of vessels] through the ice from Yamal Peninsula towards the West."

Rogozin offered a grand vision of how clearing paths through the ice will enable Russia to dominate Arctic shipping lanes. "We will be able to lead whatever vessels for any customer by transit through the Northern Sea Route: caravans with goods from Asia to Europe and we will be able to export our hydrocarbons in the form of liquefied natural gas not only to Europe but also to Southeast Asia."

To build the next-generation icebreakers, Russia is upgrading the Zvezda shipyard at Bolshoy Kamen in the Russian Far East. "In 2019, we will commission [the shipyard’s] dry dock," Rogozin said. "Just imagine the dimensions: 484 meters [529 yards] long and 114 meters [125 feet] wide. Two aircraft carriers can be built there at a time."

Russia's ambitious icebreaker projects come as the frozen wastes of the Arctic begin to sizzle under the covetous gaze of multiple nations. Once a lure for hardy explorers—and a hiding place for ballistic missile submarines—the North Pole is now seen as a new frontier with abundant energy and mineral resources. With polar ice melting, new shipping lanes are opening up that offer the prospect of more direct routes for cargo vessels sailing between North America, Europe and Asia.

However, several countries claim jurisdiction over parts of the Arctic, including Russia, Canada and Denmark. While Russia is building a fleet of new icebreakers, the United States is down to just one heavy icebreaker, and the U.S. Coast Guard reports that the Polar Star—built in 1976—is barely able to sail. The vessel is not expected to function past 2023, yet a replacement is at least seven years away, the Coast Guard has warned.