Russia and India Had Big Plans to Build a Stealth Fighter. So What Happened? 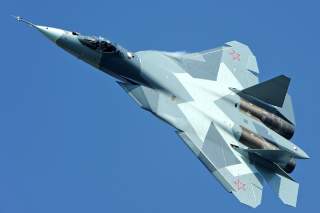 India backed out of a $9 billion agreement to develop a fifth-generation fighter jet with Russia because it didn’t need Moscow’s help, according to a new report.

On June 13, India’s Economic Times reported that Delhi pulled out of the agreement at the direction of the Defense Research and Development Organization (DRDO), India’s premier defense technology agency. Citing “sources who were involved in the negotiations and are knowledgeable about the decision,” the Economic Times said the “final nail in the coffin” was DRDO’s insistence that it could develop all the technologies Russia was offering in the the PAK FA project.

Previously, it was believed that India had soured on the agreement because the Indian Air Force (IAF) didn’t believe that Russia’s designs could meet its operational needs. The new report said that the IAF did indeed have these concerns, however, they were informed that measures could be taken that could address these reservations. While these discussions were ongoing, DRDO was asked about its opinion of the project, and “whether the deal would result in the infusion of high-end technologies in India.” The “emphatic response by then DRDO chief, S Christopher,” was that his organization was capable of producing the necessary technology itself. This “sealed the fate of the program,” according to the Economic Times.

The program to co-develop a fifth-generation fighter jet— called the Sukhoi/HAL Fifth Generation Fighter Aircraft (FGFA)— dates back to 2007, when India and Russia signed a mutual agreement. The aircraft was envisioned as a “multi-role, single seat, twin-engine air superiority/deep air support fighter with stealth capabilities and is based on the Sukhoi PAK FA (Prospective Airborne Complex of Frontline Aviation) T-50 prototype.” The 2007 agreement was followed three years later by the two sides signing a $295 billion preliminary design contract for the fifth-generation aircraft. At that time, Russia agreed to purchase 250 planes while India signed on for 144 of them. But five years later, in 2015, Moscow announced that it would only be purchasing 12-16 planes, raising concerns in Delhi. This dispute held up the signing of a final design agreement in which both sides were expected to contribute $6 billion to the design and production of the plane. To appease India, Moscow made a number of concessions on the cost and number of prototypes of the plane, as well as other issues. While it once appeared things might be back on track— as late as January of this year there were reports the contract would be signed soon— ultimately India appears to have pulled out of the agreement.

As noted above, part of the reason for this was that the Indian Air Force had soured on the plane. The IAF had a number of complaints about the aircraft. First among them is that the Air Force believed the plane’s stealth and cross-section features would be inferior to America’s F-35. IAF officials were also concerned that Russia wanted to use existing engines for the plane rather than develop new ones. “Current prototypes of the aircraft are fitted with a derivative of the Russian-made Saturn AL-41F1S engine, dubbed AL-41F1, an older aircraft engine also installed on the Sukhoi Su-35S Flanker-E,” The Diplomat reported in April 2018.

Another issue, according to an October 2017 article in Defense News, is that the FGFA “does not have modular engine concept, making maintenance and serviceability of the fleet expensive and troublesome.” An IAF official explained to Defense News that the lack of a modular engine would prevent India’s Air Force from repairing planes in-house. Instead, servicing would have to be performed by the manufacturer. Previously, IAF sources have complained about the high maintenance costs of the Su-30 planes India purchased from Russia.

IAF officials also believed the entire program was far too expensive. “Sources said the investment of $6.7 billion (Rs 44,800 crore) would give India only four prototypes of the FGFA aircraft and it will have to pay another $135 million (Rs 900 crore) each for the 127 planes, which would be ready for induction only after 2027–28,” India Today reported in September of 2017. “The cost per aircraft at the time of delivery in 2027–28, due to high inflation in defense deals, would come around $250 million bringing the total project value to around $32 billion (Rs 2 lakh crore).” Another hang up was that India wanted far more technology transfers than Russia was willing to offer. These types of issues, however, can often times be worked out in negotiations.

As it stands now, according to the new Economic Times report, India does not plan to invest in producing the plane but has conveyed to Moscow that it might buy the aircraft off the shelf once it has been built. In the interim, Russia is offering to sell India MiG-29 fighter jets to help address the IAF’s growing fighter jet shortage.