RIP: Russia and India Had Big Plans to Build a Deadly Stealth Fighter. What Happened? 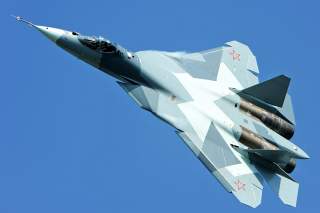 In April 2018, India’s Defense Secretary Sanjay Mitra met with a Russian delegation to announce that India was withdrawing from its joint development of the FGFA stealth fighter. This rupture was years in the making, and does not constitute a surprise—but finally clears the air for the Indian military to explore a different path to acquiring stealth aircraft.

Back in 2007, India’s Hindustan Aeronautics Limited (HAL) entered into a partnership agreement with Russian aviation manufacturer Sukhoi to jointly invest in the fifth-generation fighter then known as the PAK-FA T-50. However, the Indian Air Force wanted a more sophisticated two-seat variant of the PAK-FA called the FGFA, with improved stealth characteristics, a more powerful 360-degree AESA radar and supercruise-capable engines. (Supercruise is the ability to sustainably fly over the speed of sound without using fuel-gulping afterburners.) New Delhi promised $6 billion for R&D—$295 million of which was directly transferred in 2010—and was originally supposed spend an additional $30 billion for over 144 production stealth fighters.

But Sukhoi struggled to meet production milestones even for the basic version of the PAK FA, which still lacks the higher-thrust Saturn AL41F1 “Izdeliye 30” turbofan engines necessary to achieve desired performance parameters. Just one of the new model engines was tested in December 2017, and they aren’t expected to enter full production until the mid-2020s. Repeated delays and cost overruns combined with an economic recession and contracting defense budget caused Russia’s Su-57 order to be cut down from 150 to just twelve production aircraft, while procurement of fourth-generation Su-35S fighters was increased in its place.

By 2014 it became clear that the Indian military had grown disenchanted with the project, leaking to the public that expected cooperation and technology transfers had not occurred, and that HAL technicians had been denied access to Russian R&D facilities and the source code to the flight computer, which would have allowed India to install software upgrades without Russian involvement.

Furthermore, the Indian Air Force was not satisfied with the Su-57’s performance, and doubted it could be improved at an affordable cost. Notably, the PAK-FA has at best a frontal radar cross-section (RCS) of .1 square meters, a hundred times larger than the U.S. F-35 stealth fighter’s minimum of .001 meters. In fact, multiple Russian and Indian sources claim RCS figures of .3 or .5 square meters for the Su-57.

Additionally, the PAK FA is significantly more visible to radars from the side or rear aspect. The Russian military appears more accepting of a defensive fighter that is stealthiest when soaring head on towards interlopers at the edge of their radar coverage. India, however, would prefer an all-aspect stealth aircraft that can also penetrate defended enemy airspace to take out key targets such as nuclear weapons sites, potentially contributing to strategic deterrence.

The Indian Air Force was also doubtful of the reliability and 360-degree search capability of the PAK FA’s prototype N036 Active Electronically Scanned Array radar. Only three of about a dozen PAK-FA prototypes have been outfitted with the N036 in a “reduced” configuration without side-facing antennas.

Finally, the Indian officials were wary that the FGFA did not have a modular engine, which meant that the turbofans would have to be shipped to Russia relatively frequently for overhauls, rather than maintained locally. The high maintenance requirements of Russian MiG-29 and Su-30 fighters serving in the Indian Air Force and Navy remain a sore point with the Indian military.

Moscow and New Delhi revised the cooperative arrangement several times between 2015 and 2017 in an attempt to salvage the deal—with Russia first agreeing to downsize the Indian contribution to $3.7 billion, then later reportedly increasing the requested sum instead to around $7 billion for research and development and a few prototypes, plus $135 million per production aircraft, with expected delivery around 2028.

Later in February 2018, Russia deployed two—or possibly four—Su-57s to Hmeimim Air Base in Syria (site of a drone attack a few months earlier). As Russia had little tactical need for stealth attack jets over Syria, it was widely believed the deployment was an attempt to promote the Russian stealth-fighter program by giving them a “combat test,” even though the Su-57s were in less than fully operational condition. In any event, the stealth fighters returned to Russia after only a week or two abroad.

Ultimately, New Delhi was not convinced, and finally pulled the plug this April. Defense Secretary Mitra left the door open for possible purchase of the basic Su-57 model once it was fully operational (i.e., not just on paper) with the Russian military, or possibly reordering a specialized Indian variant after that milestone is achieved. As that will likely take around a decade, there’s a good chance India will look for an alternative stealth fighter sooner.

The withdrawal of Indian money is major blow to the Russian side of the Su-57 program. Moscow still claims it will eventually procure 220 Su-57s, but until funding materializes that will remain an aspirational goal, one the withdrawal of Indian funding will make that much more difficult. Recently, the Kremlin has devoted more defense spending to strategic nuclear deterrence, and may have concluded that pumping money into a small number of tactical stealth fighters does not provide as great a return on investment in the near term.

With the FGFA out of the picture, the Indian Air Force has two paths forward: the American F-35 Lightning II and India’s own HAL AMCA stealth-fighter program, which you can see detailed here. At the same time both the Indian Air Force and Navy are also looking to procure new fourth-generation fighters, which could include the U.S. Super Hornet or a stealthed-up Su-35S variant.

Although India’s Defense Research and Development Organization (DRDO) is excited about the prospects of the AMCA, and projects a flyable prototype by 2023, it realistically will require many years and the refining of multiple new technologies (AESA radar, high-performance turbofan engines, radar-absorbent materials) before it will be ready. And the last Indian-designed jetfighter, the Tejas, has had serious performance shortfalls after a very lengthy development cycle.

The F-35 may be subpar compared to older jets in terms of raw kinematic flight performance, but it is stealthier than the Su-57, comes more-or-less ready for export, and sports highly sophisticated sensors and networked computer systems that allow it to share data with friendly forces. Though the F-35 has its own very extensive history of cost overruns and technical setbacks, and still suffers from numerous glitches, an Indian buy-in to the F-35 program would likely occur at a later stage. by which time hopefully more of the kinks will have been dealt with (at the United States’ expense) and price per unit may have dropped. Indeed, earlier this year, U.S. Pacific Command reported that India has inquired about an F-35 purchase.

A downside of the F-35 from India’s point of view, however, is that there would likely be limited prospects for technology transfer and local manufacture, though Lockheed could possibly offer some Indian support facilities as a concession. The United States may also fear that technology transferred to India could eventually wind up in Russian hands.

Most importantly, investing in the F-35 would tie India closely to the United States for decades, as the fighter’s onboard computer and proprietary ground-based logistics system will require ongoing contractor support from Lockheed. Indeed, even the U.S. military has complained that it relies on that contract support more than it would like.

Historically, India has held some wariness of the United States, due to its (now fraying) alliance with Pakistan—in 1971, Nixon even sent a carrier task force to threaten war with India—and has instead relied more on the Soviet Union and later Russia for military hardware. Indeed, Soviet-built MiG-21 jet fighters, T-54 and PT-76 tanks, Mi-4 helicopters and antiship missiles played an important role in securing India’s victory in the 1971 Indo-Pakistani conflict.

However, India is reckoning with a changing twenty-first-century world order in which it is in security competition with the wealthier People’s Republic of China, which already has developed two stealth fighters, the J-20 and J-31. China is also a close ally of Pakistan, and has encircled India with military bases in Pakistan, Sri Lanka and Bangladesh. As the United States seeks to counterbalance China’s rising power, New Delhi shares more political interests with Washington than it does with Moscow.

This explains a dramatic warming between New Delhi and Washington since the turn of the century, with milestones ranging from a 2005 civilian nuclear technology-sharing agreement to a 2016 joint military base-sharing agreement. India now flies U.S.-made P-8 maritime patrol planes, but has yet to purchase a U.S. jet fighter.

In the past, India has resisted being dragged into foreign alliances: after all, it was one of five founders of the Non-Aligned Movement in 1961 at the height of the Cold War. Therefore, India’s next steps following the dissolution of the stealth-fighter agreement with Russia will be of interest—for its military significance, but also as a gauge of how comfortable New Delhi is with further deepening its relationship with the United States.