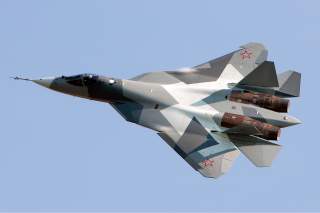 Russia and India are developing a new version of the BrahMos supersonic cruise missile that could be launched from submarines and the Sukhoi T-50 PAK-FA fifth-generation stealth fighter.

The new variant—which is considerably smaller than the original BrahMos—would be light enough to be carried even on relatively diminutive Mikoyan MiG-35 Fulcrum-F.

“We are working on the missile’s light version. It should fit the size of a torpedo tube and be almost 1.5 times smaller by its weight. It will be possible to mount our airborne missile on a wide range [of aircraft],” Alexander Leonov, CEO and general designer of NPO Mashinostroyenia told the Moscow-based TASS news agency. “Of course, we’ll be developing it, first of all, for the fifth-generation plane but, possibly, it will be mounted on the MiG-35 fighter, although we have not carried out such developments.”

The original BrahMos was a Russian-Indian joint development version of the P-800 Oniks anti-ship cruise missile. The original weapon—though capable of speeds nearing Mach 3.0 at ranges of roughly 186 miles—is enormous with a weight of roughly 5,000lbs for the air-launched version. Thus, only the largest fighters such as the Sukhoi Su-30MKI are able to carry it aloft.

With India joining the voluntary Missile Technology Control Regime treaty, Moscow and New Delhi have stepped up cooperation on development on future extended range version of the BrahMos—with ranges close to 400 miles. The extended range weapons would enable the Indians to strike at targets deep inside Pakistan with near impunity once the weapon is operational.