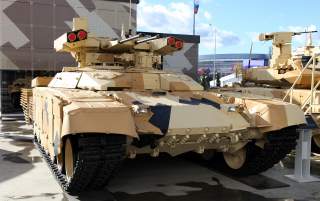 The Terminator—which is a tank support fighting vehicle—is a new Russian concept for a machine that can support main battle tanks in combat against infantry in build up areas and difficult terrain using a combination of rapid fire cannons and guided-missiles. The Russians are buying the vehicle in small numbers to refine the concept and secure export orders.

"The tank support combat vehicle dubbed the Terminator has been accepted for service and is being serially delivered to the Russian army,” Uralvagonzavod told the state-owned TASS news agency. “The first batch of vechicles has already been handed over to the military."

The Terminator is a unique vehicle built on the chassis of a T-72 or T-90 tank—depending on the variant—but it dispenses with the 125mm main gun. Instead, the machine is armed with two 30mm guns, a large-caliber machine-gun and Ataka-T anti-tank missiles. According to TASS, the vehicle is designed to provide fire support for armored forces “in an offensive, in particular, to neutralize an enemy’s manpower armed with mobile anti-tank systems.”

The Russian military has no clear need for the Terminator—which already has a vast arsenal of very capable armored fighting vehicles—thus initial orders will be small until the machine proves itself. That being said, the Terminator could prove to be a hit on the export market, particularly countries that might have to counter insurgents in difficult terrain. “There is not a clear need, hence the order for this platform is likely to be small, but it may prove lucrative on the export market,” Michael Kofman, an expert on the Russian military at the Center for Naval Analyses told The National Interest.

More broadly, the Russian army is experimenting with the Terminator concept as it shows promise and could fundamentally change how armor is employed on the battlefield. Indeed, the new machine could find its way to Syria for combat testing. If the Terminator proves successful, it could significantly change the way armored forces fight. “The Russian armed forces are rethinking the role of the IFV [infantry fighting vehicles] on the battlefield, and looking at options for armored vehicles to support armor advances,” Kofman said. “It’s a question of what is the best way to support tanks on the battlefield, and the answer is that the IFV has to have some staying power, and also provide considerable added firepower to supplement that of the MBT [main battle tank].”

However, right now, the Terminator is just a concept. Only once the machine is successfully used in combat will we know how successful the concept is.