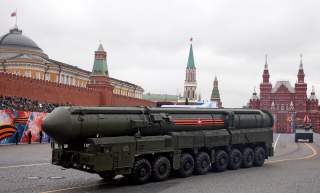 The Russian Aerospace Forces (VKS) tested a new upgraded version of the 53T6 Gazelle interceptor missile at the Sary-Shagan test site in Kazakhstan on November 24. The missile is one of the key components of Moscow’s Anti-Ballistic Missile defense system.

The Russian Defense Ministry did not provide much information about the details of the test or what kind of missile they were testing. However, Pavel Podvig, an independent analyst based in Geneva who runs the Russian Nuclear Forces research project, offered some insights.

“The interceptor was described as a ‘new modernized’ one, so this is probably the same interceptor that was launched in June 2017,” Podvig said.

“Given that the launch container is essentially the same as that of the 53T6/Gazelle missile, the new interceptor is likely to be a 53T6 upgrade. And probably a modest upgrade at that - if the June launch was supported by ‘industry representatives,’ this one appears to be done by the VKS crew alone.”

Under the terms of the treaty, the United States and the Soviet Union agreed that each side would be allowed no more than two ABM sites (later reduced to one) with no more than 100 interceptors and launchers in total. These sites were “so restricted and so located that they cannot provide a nationwide ABM defense or become the basis for developing one. Each country thus leaves unchallenged the penetration capability of the others retaliatory missile forces,” according to the treaty.

“The Treaty permits each side to have one limited ABM system to protect its capital and another to protect an ICBM launch area,” the treaty states. “The two sites defended must be at least 1,300 kilometers apart, to prevent the creation of any effective regional defense zone or the beginnings of a nationwide system. Precise quantitative and qualitative limits are imposed on the ABM systems that may be deployed. At each site there may be no more than 100 interceptor missiles and 100 launchers.”

Before President George W. Bush withdrew from the ABM treaty in June 2002, the document was considered to be an essential component of the arms control regime. Indeed, Bush himself called the treaty a “cornerstone of strategic stability”—but would nonetheless withdraw from the treaty. The Russians’ initial response at the time to the U.S. withdrawal was muted—though both Moscow and the overwhelming majority of arms control advocates believed that the move was a historic mistake.

As Tom Collina, now the director of policy at the Plowshares Fund wrote, Bush’s decision did prove to be a mistake.

“The Bush administration did succeed in allowing Russia to keep its most destabilizing weapons, encouraging Chinese nuclear modernization, and complicating current U.S.-Russian arms reduction efforts and missile defense cooperation talks,” Collina wrote. “The Bush administration’s politically-motivated abrogation of the ABM treaty was a strategic mistake, and its consequences are still with us today.”