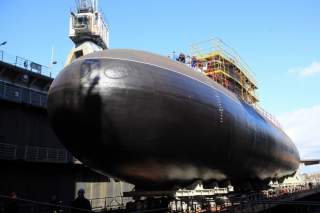 Russia has launched what it claims to be the “quietest submarine in the world.”

This week, Admiralty Shipyards—a Russian defense company— held a ceremonial launching for its newest Varshavyanka-class diesel-electric submarines. Dubbed the Krasnodar, the vessel is the fourth of a planned six upgraded Kilo-class subs Russia is constructing under Project 636.3.

According to the company’s website, the commander of Russia's Navy, Viktor Chirkov, attended the ceremony, which was held in St. Petersburg on Saturday.

Previously, Russian state media outlets have said that the Varshavyanka-class are the “quietest in the world, and so was dubbed ‘black hole’ by NATO.”

The submarines pack a powerful punch, and are intended primarily for anti-shipping and anti-submarine warfare. “Armed with 18 torpedoes and eight surface-to-air Club missiles, Project 636.3 submarines are mainly intended for anti-shipping and anti-submarine missions in relatively shallow waters. They have an extended combat range and can strike surface, underwater and land targets,” Russia Today previously reported. The torpedoes are launched out of six 533-mm bays, which automatically reload every 15 seconds.

Fifty-two sailors are needed to operate the subs, which displace 3,100 tons and can maintain continuous patrol for 45 days, according to Naval-Technology.

At the ceremony on Saturday, Admiral Chirkov said that these first two Varshavyanka-class diesel-electric submarines are currently undergoing deep water trials in the Arctic Sea, but that both would enter into permanent service for Russia’s Black Sea Fleet by the end of the year.

Eventually, all six of the Varshavyanka-class subs will enter service with the Black Sea Fleet. The Black Sea Fleet’s main force is stationed out of Sevastopol, Crimea. However, Russian media outlets have indicated that these six subs’ home base will be the port of Novorossiysk, Russia.

After years of neglect, Russia has embarked on an ambitious submarine-building program as part of its larger military modernization. As Defense News reported earlier this year, “Four different kinds of submarines are under construction and more are coming.”

Perhaps most notably among these is the new Borei-class nuclear ballistic missile submarines (SSBNs), which Russian state media outlets have claimed are the “the planet’s most advanced nuclear deterrence tool.” The Borei-class SSBNs, which will form the backbone of the sea leg of Russia’s nuclear triad, are 170 meters long and 13.5 meters wide. They are armed with 16 Bulava Submarine Launched Ballistic Missile, which have a range of over 9,000 kilometers.

“We’ll be facing tough potential opponents. One only has to look at the Severodvinsk, Russia’s version of a [nuclear guided missile submarine] (SSGN). I am so impressed with this ship that I had Carderock build a model from unclassified data,” Johnson said, USNI News reported.