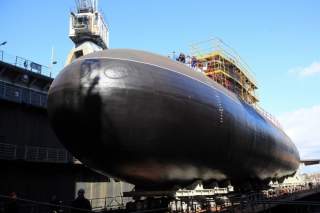 India and Russia are in the final stages of talks for Delhi to lease another nuclear attack submarine from Moscow.

According to India’s Economic Times, Indian Prime Minister Narendra Modi and President Vladimir Putin will discuss the deal on the sidelines of the BRICS Leadership Summit currently being held in Ufa, Russia.

“Several sources related to the project that ET spoke with confirmed that talks on leasing a new submarine under the 'Chakra 3' project are in advanced stages and that the issue will be discussed during Prime Minister Modi's visit to Russia this week,” the report said.

There has been previous signs that India intends to lease a second Russian-built nuclear attack submarine (SSK). And, during a trip to India last year, Vladimir Putin indicated that Russia would be interested in such a deal.

However, the new Economic Times report said that in contrast to previous Indo-Russian submarine deals, under the “Chakra 3” project, Russia will build India a customized submarine. The report speculates that the boat may be one of Russia’s new Yasen-class submarines, or else a derivative with a similar design.

"The final shape is yet to be decided, but it is now almost certain that a 'greenfield' submarine will be built," ET quotes an unnamed source close to the program as saying.

A Yasen-like submarine would be a significant boost to India’s depleted undersea fleet. As Kyle Mizokami has observed on The National Interest: “The Yasen class is one of the most advanced submarines in the world. The class reportedly has a crew of only ninety, implying a high level of automation. A 200MW nuclear reactor is thought to power the submarine to a maximum speed of 35 to 40 knots, with a ‘quiet operating speed’ of 20 knots.”

Regarding weaponry, Mizokami pointed out that: “The Yasen class has eight vertical launch tubes, four 650mm torpedo tubes and four standard-diameter 533mm torpedo tubes. Besides standard guided torpedoes, Yasen will almost certainly be armed with the Shkval supercavitating torpedo, capable of traveling at 200 knots to ranges from 7 to 13 kilometers.”

India is currently in the process of trying to revamp its submarine fleet, which has been battered by a number of mishaps in recent years. For starters, India is trying to build nuclear-powered ballistic missile (SSBNs) to serve as the sea-based leg of its strategic deterrence.

In addition, earlier this year India greenlit a project to build six-indigenously produced nuclear attack submarines, which would likely be manufactured with significant foreign assistance from abroad. In fact, as The National Interest previously reported, Russia and India have been in discussions over starting a joint-venture involving the nuclear attack submarines. Those talks are still in the very preliminary stages.

Furthermore, India has experiencing leasing Russian-built nuclear attack submarines. In the 1980s, India briefly leased a SSK from the Soviet Union under Chakra 1. Delhi took on a ten-year lease for a second Russian-built SSK in 2012. Unlike the deal currently in discussion, both of those earlier submarines were refurbished Soviet and Russian boats.

In related news, Russia is reportedly interested in making India a global hub for the upgrade, maintenance and repair of Russian-built conventional submarines. Evgeny V. Shustikov, Deputy Director General of Russia’s state-owned Zvyozdochka Shipyards, tells the Economic Times that: "We are in the process of negotiating with an Indian shipyard and if these negotiations are successful, it could become our partner for future tasks of modernising Kilo class submarines. Not just for India but for third nations as well.”

The report went on to say that: “Officials from the state-run Zvyozdochka shipyard told ET that a memorandum of understanding could be signed within a month as it is in final talks with an Indian partner for the project. Russian engineers have already visited the Indian yard and advised it on changes to be made as well as investments needed to execute the project.”