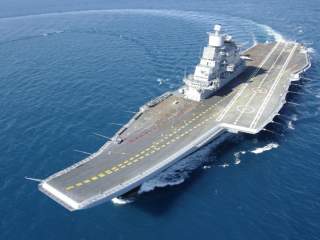 After decades of effort to reconstitute its shipbuilding industry following the fall of the Soviet Union, Russia looks set to regain a key ability: Moscow will be able to build aircraft carriers and amphibious assault ships domestically as soon as 2019.

While Moscow has one conventionally powered aircraft carrier—the Admiral Kuznetsov—in service, the vessel was built at the Nikolayev shipyards in Ukraine. Following the 1991 collapse of the Soviet Union, Russia lost access to those facilities, which had built every one of Moscow’s previous aircraft carriers. As such, Russia has had to reconstitute its aircraft carrier industrial base within its current borders.

“We’ll be ready to begin construction of helicopter carriers as well as aircraft carriers,” Alexey Rakhmanov, president of Russia’s United Shipbuilding Corporation (USC), recently told Rossiya’24. “If you take up the technological capability for building aircraft carriers, we hope to acquire it by the beginning of 2019 as long as modernization works are completed.”

While Rakhmanov didn’t specify where Russia would build its new flattops, Moscow’s next generation aircraft carriers will likely be built at the Sevmash shipyards in Severodvinsk. Sevmash is the only Russian shipyard with recent aircraft carrier experience, having refurbished and modified the Kiev-class aircraft carrier Admiral Gorshkov into India’s Vikramaditya.

Previous reports had suggested that Russia was preparing to start building it first post-Soviet era carrier in 2025, at the earliest. It would also take roughly ten years to build the massive warship.

While the projected new Russian flattop is roughly a decade away, the Krylov State Research Center and Nevskoye Planning and Design Bureau showed off a model of a prospective 100,000-ton displacement aircraft carrier last year. Designated as Project 23000E Shtorm, the massive nuclear-powered warship could carry as many as ninety aircraft. Optimistic estimates suggest the ship would cost $5.6 billion—it’s likely to be double that price tag or more.

In the meantime, Russia is preparing the groundwork for the new carrier. Moscow has started work on an electromagnetic catapult launch system (EMALS) similar to those found onboard the U.S. Navy’s new Gerald R. Ford-class (CVN-78) carriers. A Russian EMALS prototype is apparently being tested at the Central Aerohydrodynamic Institute (TsAGI) at the Zhukovsky airfield outside Moscow.

Meanwhile, elements of the carrier’s nuclear propulsion system will be proven onboard the Russia’s planned 18,000-ton Lider-class guided missile destroyers. However, even given the Lider’s massive size, its propulsion system is not likely to be powerful enough to power an aircraft carrier.

Russia also hopes to build new amphibious assault ships to take the place of the two French-built Mistrals it had ordered from France. Since those ships were not delivered, Moscow will likely seek a domestically manufactured replacement. It’s not clear when or even if Russia is proceeding with the project, but available information suggests Moscow is interested in a vessel capable of hosting a dozen helicopters and 450 naval infantrymen. The ship could have a displacement of roughly 16,000-tons if previous Russian defense ministry statements hold true.