Russia and NATO: Headed for a Missile Arms Race in Europe? 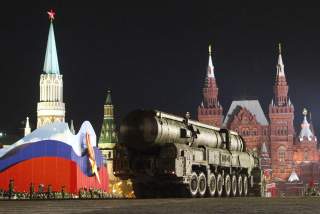 The NATO alliance is urging Moscow to return to compliance with the 1987 Intermediate-range Nuclear Forces bilateral U.S.-Russia treaty, which bans land-based missiles that have ranges between 500km and 5,500km.

“Allies have identified a Russian missile system that raises serious concerns,” reads a statement from the alliance. “NATO urges Russia to address these concerns in a substantial and transparent way, and actively engage in a technical dialogue with the United States.”

The alliance says its welcomes “continued efforts by the United States to engage Russia in bilateral and multilateral formats, including the Special Verification Commission, to resolve concerns about Russia’s compliance with the INF Treaty.”

The alliance—where European members would have to host any new American INF class weapons—considers alleged Russian violations of the treaty to be a serious problem.

“Allies emphasize that a situation whereby the United States and other parties were abiding by the treaty and Russia were not – would be a grave and urgent concern,” NATO said in a statement. “The Alliance is united in its appreciation that effective arms control agreements remain an essential element to strategic stability and our collective security.”

NATO member states are taking actions to incentivize Russia to return to compliance with the treaty. “In this spirit, our actions, including national measures taken by some Allies, seek to preserve the INF Treaty, strengthen the Alliance, and incentivize Russia to engage in good faith,” the NATO statement reads.

However, the NATO statement does not specify what measures the alliance is taking to coax Russia back into compliance with the 30-year-old treaty. The United States has said is taking “economic and military measures” to force Russia back into compliance according to State Department spokeswoman Heather Nauert. Those measures include the development of a new American cruise missile that falls within the class prohibited by the INF treaty.

At issue is Russia’s development of the Novator 9M729 land-based cruise missile, which is likely a development of the Kalibr-NK naval cruise missile. Though the United States has been accusing the Russians of violating the INF treaty since 2014, it was not until late this year that Washington publicly named which of the Kremlin’s new weapons was the problem. Many analysts like Jeff Lewis have long suspected that the INF-busting weapon in question was the 9M729, but there was no official word from the United States government until this month.

At this point, the INF treaty is essentially dead. It is very unlikely that the Kremlin will return to compliance with the treaty anytime soon. Indeed, in many ways the treaty was outdated—the most obvious drawback is that it is a bilateral treaty.

“INF treaty was bilateral, although it did involve, in an indirect fashion, a number of European countries where the United States and the Soviet Union deployed their intermediate-range missiles,” as former arms control negotiator Nikolai Sokov, a senior fellow at the James Martin Center for Nonproliferation Studies, wrote for The National Interest. “This made sense not only because the two countries were the two protagonists of the Cold War, which was at that time drawing to an end, but also because few countries in the world had or could have missiles in that category. That has changed—plenty of countries in Eurasia have such missiles today—North Korea, China, India, Pakistan, Israel, Iran, etc. This has been an important concern for Russia for quite a long time.”

Perhaps the best option is to negotiate a new treaty that includes other parties such as China. “Instead of allowing it to die quietly, we could negotiate a new agreement—one that addresses nuclear weapons rather than delivery vehicles and one that includes other nuclear states,” Sokov wrote. “One is left to hope that the sad fate of the INF treaty will serve as a lesson, not as an example.”