Russia Opens Its Doors... To Asia 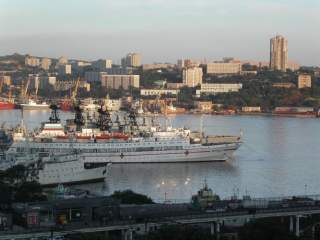 On July 13, Russia's President Vladimir Putin signed a law to establish a "free port" in Vladivostok, Russia's Pacific gateway. The free port opens for business on January 1, 2016. It will be a customs-free zone with an extremely low corporate income tax rate of just 5 percent.

Vladivostok is a city of 600,000 people that has often been called "the San Francisco of the East”—though not often by people who have actually been there. Famous as a bastion of conservatism, in the Russian revolution it was the last major city to fall into communist hands.

In 2003, the city fathers actually rebuilt a monument to Tsar Nicholas II that had been destroyed in 1930.

Still, the city has San Francisco's steep hills, San Francisco's foggy weather, and even some of San Francisco's old world charm. And now San Franciscans will have the opportunity to go see it for themselves. The open port initiative includes an 8-day visa on arrival. There is no word yet on what countries will be included, but if the Russian government is at all serious about the initiative it will include Americans.

The visa on arrival will be a welcome first for Russia. Citizens of most developed countries face a tortuous visa bureaucracy when visiting Russia. A visa on arrival—even if only for a week—will do much to improve Russia's prospects of integrating its Pacific territories with the rest of northeast Asia.

The free port itself is likely to be less important. Simply declaring Vladivostok open for business is not enough to turn it into a major Asian port. Serious infrastructure bottlenecks will almost certainly reduce the utility of the port, even though Russia just spent some $20 billion on infrastructure in the region in preparation for the 2012 APEC summit.

One beneficiary of that APEC binge was Far Eastern Federal University (FEFU), the flagship educational institution of the Russian Far East. The university got to keep the summit site as a brand-new campus on pristine Russky Island, a former military reserve across the bay from Vladivostok. The campus is so nice that Vladimir Putin himself stays there when he is in town.

But over the last few years, Russians have learned the hard way that building a high-achieving educational institution is about much more than just constructing some nice new buildings. The building and the campus' park setting are very nice indeed. But faculty salaries are low and international linkages are relatively weak.

Building a high-productivity industrial cluster is just as difficult and depends just as much on the human touch. Low taxes are nice but low taxes alone do not incubate real industries. In business as in education and research, human mobility and human capital are all-important.

A looser visa regime will make it easier for schools, universities, and businesses of all kinds to attract international visitors and international staff. It will make it easier to bring in management and technical consultants from around the region. Head offices will be able to visit the local branch without advance warning. Businesspeople will be more willing to relocate to Russia if their families can visit anytime.

An eight-day visa on arrival won't change the world, but it may change Russia for the better. The heaviest millstone holding down Russian economic development is not an over-reliance on energy or even Western economic sanctions. It is Russia's lack of openness to the outside world. In Russia, a little openness may go a long way.

But a little openness is only a start. If the Vladivostok free port initiative is to amount to anything more than a massive duty-free shopping subsidy for the region's ill-conceived casino resort developments, it will have to be followed up by increasing openness and increased funding for the region's human and research infrastructure.

The worry is that in Russia, a special-interest tax concession is all the much-hyped "free port" will turn out to be. The real San Francisco thrives on its culture of openness and its investments in education and human capital. Las Vegas, with its low taxes and glitzy casinos, is a poor cousin to the Bay area.

Human capital may be expensive, but openness is cheap. The Russian Far East, 4,000 miles away from Moscow and sitting at the juncture of China, Korea, and Japan, may be the best place for Russia to open first. As Europe increasingly turns inward (and away from Russia), the countries of northeast Asia are turning ever more outward. Asia may turn out to be much more receptive to Russian business than Europe ever was.

Salvatore Babones (@sbabones) is an associate professor of sociology & social policy at the University of Sydney and an associate fellow at the Institute for Policy Studies (IPS).