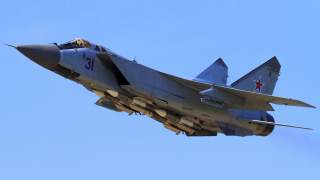 The Kremlin’s new “hypersonic” Kh-47M2 Kinzhal—or Dagger in English—missile made its public debut during Russia’s annual Victory Day Parade onboard a pair of newly modified MiG-31K Foxhound supersonic interceptors on May 9.

The new weapon was announced during a speech by Russian president Vladimir Putin on March 1, when he introduced a host of developmental capabilities designed to overcome American-made missile defenses. Ten MiG-31 aircraft, which are currently on “experimental combat duty,” have been modified to carry the Kinzhal thus far. The Foxhound was chosen to carry the Kinzhal because of its range and huge payload capacity combined with its high altitude and blistering speed. The jet is capable of cruising at Mach 2.35 with an air-to-air payload and is temperature limited to Mach 2.83.

“The MiG-31 is its carrier, this aircraft is most suitable to disperse this missile to the required speeds at the right altitudes,” Russian deputy defense minister Yury Borisov told the Russian-language outlet Star. “In support of the fact that this is not some kind of exotic: Today, ten aircraft are on experimental combat duty and are ready for use depending on the situation.”

The Kinzhal was developed to overcome missile defenses and the Russians believe that no existing system can counter their new weapon. “This is a modern weapon: a hypersonic missile of increased range, which, in fact, can overcome air defense and anti-ballistic missile defense systems,” Borisov said. “It is invulnerable and has very serious fighting power and potential.”

Putin said that the weapon is already starting to enter service with the Russian military. “Its tests have been successfully completed, and, moreover, on December 1 of last year, these systems began their trial service at the airfields of the Southern Military District,” Putin said. “The unique flight characteristics of the high-speed carrier aircraft allow the missile to be delivered to the point of discharge within minutes. The missile flying at a hypersonic speed, 10 times faster than the speed of sound, can also maneuver at all phases of its flight trajectory, which also allows it to overcome all existing and, I think, prospective anti-aircraft and anti-missile defense systems, delivering nuclear and conventional warheads in a range of over 2,000 kilometers. We called this system Kinzhal.”

The Russians had also earlier released video footage of the Kinzhal. Portions of the video were intentionally blurred to obscure certain aspects of the weapon, but the Kinzhal appears to be an aero-ballistic missile rather than a scramjet-powered air-breathing missile. However, that should come as no surprise to serious analysts because no nation on Earth has mastered the material sciences to build a true scramjet-powered missile yet. That technology is still years away.

“Crew of MiG-31 fighter of the Russian Aerospace Forces conducted combat training launch of a hypersonic missile of the Kinzhal high-precision aviation missile system in the assigned area,” the Russian Ministry of Defense said on its Facebook page. “The fighter took off from a Southern military district airfield in course of test combat alert. The launch was conducted normally. The missile hit the target at a training ground. Hypersonic missile confirmed its technical operational performance and timing data of the Kinzhal missile system.”

The Kinzhal aero-ballistic missile is designed to be effective against both land and maritime targets. “The Kinzhal system is designed to eliminate ground and sea targets,” the Russian Defense Ministry said. “Due to high flight characteristics of MiG-31 aircraft and high-maneuverable radar-stealth hypersonic missile, the Kinzhal has no analogues in the world.”

The MiG-31 is an ideal launch platform for the Kinzhal missile because of its range, massive payload, altitude and sheer speed. The aircraft has a service ceiling of roughly 67,500ft and is temperature limited to a maximum speed of Mach 2.83. However, the massive jet can maintain very high supersonic speeds for extended periods—its combat radius is 390 nautical miles at Mach 2.35—with a full air-to-air payload of R-37 missiles. Thus, exchanging its R-37 missiles for a Kinzhal missile, the MiG-31 can quickly boost the new weapon into launch position and impart significant launch energy to the aero-ballistic missile.

It is not clear how stealthy or “invincible” the Kinzhal really is, but that the weapon would be highly maneuverable should not come as a surprise. The Iskander ballistic missile—on which the Kinzhal is based—is already capable of maneuvering in flight and follows an erratic trajectory that would make it exceedingly difficult to intercept. Nor does any other country operate an air-launched ballistic missile, so Moscow is correct in that sense that the Kinzhal does not have an equivalent outside of Russia. However, the weapon is not a “hypersonic weapon” in the sense that it is an air-breathing cruise missile based on scramjet technology—though ballistic missiles inherently fly at hypersonic speeding during their flight time. Thus, at the end of the day, the Kinzhal is a formidable weapon.