Is Russia Preparing for War? 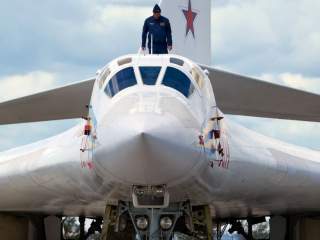 Is Russia preparing for a new war in Ukraine? The answer—according to some of the best analysts specializing in the region—is: Maybe.

Some, like former The National Interest editor, Dr. Nikolas Gvosdev, currently the Jerome E. Levy Chair for Economic Geography and National Security at the U.S. Naval War College, suggest that Moscow could be preparing for military action in Ukraine. Gvosdev—who had been asked to make the case for why Russia might embark on such a course of action for an evening discussion at the Center for the National Interest—noted that he was speaking in a personal capacity using open-source materials. Simon Saradzhyan, director of the Russia Matters Project at Harvard University’s Belfer Center made the counter argument explaining why it is  highly unlikely Moscow would embark upon a new adventure in Ukraine.

“Russia may be gearing up and preparing for military action,” Gvosdev said at the Center for the National Interest—which is the Washington-based foreign policy think-tank that publishes The National Interest—on Sept. 13. “That comes on the heels of the latest Russian snap exercise. What we have seen with these snap exercises over the last several years is that they get bigger—more people, more equipment, wider range and increasingly—to borrow a term from American parlance—they’re whole of government exercises.”

It is the sheer scale of Russian snap exercises that concern Western governments, Gvosdev said. These enormous Russian exercises typically involve more than 100,000 troops from across the spectrum of military forces. Moreover, a host of Russian government agencies take part in these drills. But while it is easy to dismiss the Russian drills as a simple exercise, such maneuvers inevitably lull outside powers into a false sense of security. “Every time you do an exercise, you gain several benefits,” Gvosdev said. “It makes it harder to differential between what is an exercise and what is in fact a mobilization or preparation for a strike.”

Additionally, the more often Russian forces practice such mass mobilizations, the more proficient the Kremlin’s forces become at such large-scale operations. Indeed, Gvosdev said that there is ample evidence to suggest that Russian forces are leaving behind prepositioned stocks in their deployment zones. That would help Russian forces to move into position faster while minimizing the risk detection during an actual operation.

Using exercises as a cover for preparations for an actual military operation are not unprecedented. During the Cold War, the Soviet Union’s doctrine called for staging massive military exercises to provide cover for preparations for a strike on NATO forces. Indeed, that was one of the reasons the Soviet leadership mistook the 1983 Able Archer exercise as a prelude to a preemptive NATO attack on the Warsaw Pact. Other examples include the 1973 Yom Kippur War, where Egyptian forces held a series of massive drills to cover for their preparations to cross the Suez Canal. “Holding exercises continually is a way to throw a potential adversary off-guard,” Gvosdev said.

Why Moscow Would Strike:

There are many reasons that Russia would want to strike at Ukraine or the Baltic states, Gvosdev said. He cautioned, however, that Russian military action would not likely take the form of a massive Cold War-era Fulda Gap-type scenario—where hundreds of thousands of Soviet tanks and infantry would invade West Germany. Rather, Russian military action in today’s environment would be much more limited in scale and far more nuanced in execution. A Russian operation might attempt to change the balance of power in Ukraine or seize small slivers of land or border posts in the Baltics to test American/NATO resolve, Gvosdev said.

One of the reasons Moscow might act is because the Kremlin perceives that the European Union will not apply any meaningful pressure on the Ukrainian government to implement its side of the Minsk agreements. “Russian may conclude over the next several months that there will be no pressure on Ukraine to do that,” Gvosdev said. Additionally, there does not seem to be any movement in Europe to lift sanctions on Russia over the Ukraine question.

Gvosdev said that Russia faces a timing problem—the longer the sanctions remain in place, the weaker its position gets while Ukraine become relatively more powerful. Indeed, Kiev could choose to employ a strategy similar to the one Croatia used during the breakup of Yugoslavia—which is to accept the status quo for now to rebuild and then strike back at a later date to recover lost territories. “Russia could want to do something decisive to change the balance of what’s happening in Ukraine if it feels there is no sanctions relief coming from the Europeans by the end of the year,” Gvosdev said.

Additionally, presidential elections in the United States might factor into the Kremlin’s calculus. The outgoing Obama administration is in the process of leaving office with many staffers having already left. Come November, a new team will be preparing to come into office, but it will take time to get those new staffers into place when the new president is sworn in on Jan. 20, 2017. Russia could take advantage of the disarray in the U.S. government during the transition. “If you’re going to act, now is the time to do it,” Gvosdev said.

Making the counter argument, Saradzhyan asserted that Russia has no intention to go to war anytime soon. The Russian military—like all military forces around the globe—is preparing for war because that is their purpose.

The Russian military has to be prepared to defend Russia’s vast territories against a range of possible threats. Those threats range from insurgencies within in own borders in the Caucuses to preventing the emergence of hostile hegemonic powers in its periphery. Toward the higher end of the scale, Russia also has to prepare to defend itself against a conventional peer-level threat. “Generals have to prepare for all sorts of scenarios—including worst case scenarios, which would be an all-out war,” Saradzhyan said. “That doesn’t mean they want to fight or initiate that war.”

Saradzhyan said that while it is true that exercises have been held as a prelude to war, that is not always the case. Indeed, Russia used exercises to provide cover for troop movements prior to Russia’s 2008 intervention in Georgia, the Crimea campaign and Moscow’s recent Syrian adventure. However, those types of situations are comparatively rare.

Russia does not really have any reason to use force in Ukraine right at the moment, Saradzhyan said—Moscow wants to demonstrate to Kiev that the conflict in its eastern territories are not frozen because the Kremlin wants Donbass integrated back into Ukraine so it can impede the country's effort to integrate into West. Despite the somewhat improved capabilities of the Ukrainian military, if Russia truly felt that its vital interests were at stake, the Kremlin could crush Kiev’s fledgling forces and roll right to the Polish border with ease. As Saradzhyan pointed out, Ukraine had perhaps 60,000 troops available to it at the start of the conflict—though that number has likely grown—while Russian forces can muster about a million soldiers.

Moscow could simply overwhelm Kiev if the Kremlin genuinely thought its national security interests were at stake. Even then, Russia would likely not want to occupy Ukraine—rather, the Kremlin would destroy Kiev’s capability to wage war. In any case, the point is likely moot because Ukrainian forces wouldn’t have materially improved to a point where they might be able to pose any real challenge to the Kremlin before the end of the year—which is the window for a Russian to escalate hostilities through its proxies, Saradzhyan said.

Russia would have to genuinely believe that its vital national interests were at stake in order to go war. One action the West could take to provoke a genuine military conflict with Moscow would be to try to cut Russia off from the global financial system. “As a Russian minister said, exclusion from SWIFT would amount to a declaration of war on Russia,” Saradzhyan said.

Dave Majumdar is the defense editor for the National Interest. You can follow him on Twitter: @davemajumdar. This story has been updated.