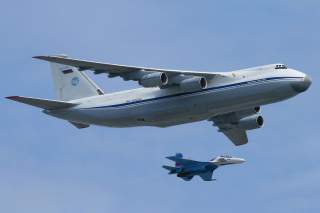 On last Friday, Vladimir Putin held his annual press conference, capping what many have described as an extremely successful year for the Russian president. Indeed, if you’re a regular consumer of today’s media, you could be forgiven for believing that Russia has supplanted the United States in the Middle East, that Russian hackers single-handedly placed Donald Trump in the White House, and that Trump is poised to act as a Kremlin mole inside the U.S. government.  Russian troops are probably on the verge of coming ashore somewhere near Washington, D.C.

Though this narrative is obviously exaggerated, a version of it has dominated discussion of U.S.-Russian relations since before the election. Indeed, President Obama’s recent assertion that Russia is “a smaller country… a weaker country, and their economy does not produce anything that anybody wants to buy except oil and gas and arms…” was largely met with derision.

But while Putin may have had a good year from a PR standpoint, Obama’s version is far closer to reality: Russia’s purported victories are not as great as they appear, and will contribute to Russia’s structural weaknesses in the long-term.

Take the issue of Russian hacking and involvement in the U.S. election, perhaps Putin’s biggest public relations coup of 2016. There is no doubt that the release of documents stolen from the Democratic National Committee – a theft that the intelligence community generally agrees was perpetuated by Russian state-sponsored hackers - hurt public perception of Hillary Clinton in the run-up to the election.

Indeed, whether Russia truly intended to elect Trump, or simply to cause chaos, it certainly succeeded in muddying the electoral waters. Yet it is questionable the extent to which this intervention actually altered the outcome of the election. A variety of other factors - the FBI Director’s last minute letter to congress, economic dislocation, and popular discontent with mainstream politicians – also contributed to Clinton’s surprising loss.

And in exchange for this meddling, Russia has earned the enmity of many current and future U.S. policymakers, as well as the likelihood of a U.S. response that will be carried out, as Vice President Biden noted, “at the time of our choosing and under the circumstances that have the greatest impact.” Nor is Trump’s election necessarily a win for Russian leaders; he may have taken a friendlier tone with the country, but as with so many foreign policy issues, his potential for unpredictability is high.

Consider another key issue where Russia has purportedly gained during 2016: its Syrian intervention. Certainly, Russia has been successful in bolstering the Assad regime, and preventing its collapse. The intervention has also played well on television, giving Putin popularity at home, and giving Russia greater clout in Middle East diplomacy.

At the same time, the intervention has further worsened relations between Russia and the West, particularly as violations of humanitarian norms in Syria have contributed to Russia’s international pariah status. And while it has become trite, it is true that there is no military path to victory for Russia in Syria. They lack the ability to restore the Assad regime’s control over all of Syria, and cannot easily withdraw without leaving the impression of defeat. In effect, Russia is now encountering the same problem that the United States did in Iraq and Afghanistan: swift military intervention is relatively easy, but mopping up an insurgency is substantially harder.

More broadly, Russia is very good at breaking things and getting media attention, but less good at resolving problems. In Ukraine, for example, Russia successfully seized Crimea, but is still under U.S. and European sanctions for its actions, while the Minsk peace process for Eastern Ukraine appears to be stalled. Even if Donald Trump unilaterally lifts U.S. sanctions over congressional and bureaucratic objections, European sanctions are likely to remain in place for some time.

And President Obama’s remarks about Russia are essentially correct: the country has serious, fundamental structural weaknesses. Putin’s public relations triumphs may serve to distract from these problems, but cannot resolve them. Chief among these problems is the Russian economy, which despite recent gains is barely expected to return to positive growth next year after years of recession. Inflation remains high, hurting wages and savings for majority of the Russian population.

Even the removal of sanctions would do little to improve the situation. Under Putin, the structural weaknesses of the Russian economy – overreliance on oil and gas revenues, pervasive corruption and cronyism – have gone largely unresolved. The Russian economy is vulnerable to continuing low oil prices, even in light of a recent OPEC deal part-brokered by Russia. And demographics longterm trends continue to present problems, and will so for a longtime to come.

None of which is to say that Russia should not be a concern for policymakers. Putin’s willingness to seize foreign policy opportunities with military means makes him unpredictable, a worrying prospect given that the United States is bound as a member of NATO to defend states which border Russia. European countries with elections next year will need to be on guard against meddling from Russia. And regardless of whether it is or is not a great power in terms of conventional military capabilities, Russia remains one of the world’s few nuclear powers.

Yet policymakers must be realistic, both about Russia’s capabilities, and about what Russia’s ‘victories’ in 2016 actually mean over the long-term. Putin may present a rosy picture for public consumption. But to do so, he has to paper over a number of long-term problems. Russia may end 2016 on a high note, but it heads into 2017 with a flailing economy, no clear path out of Syria, and little prospect of dramatically higher oil prices. As much as he may pretend otherwise, Putin’s problems are here to stay.

Emma Ashford is a Research Fellow at the CATO Institute.