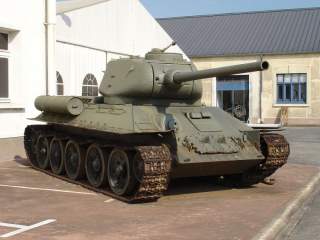 Did you know that Hitler invaded China in 1956? Or that America dropped the first atomic bomb on Paris in 1924?

You didn't? Well, that's because these are taradiddles. Historical events that never actually happened. Yet it is also a lie -- and a crime -- to state that the Soviet Union invaded Poland in 1939, according to a Russian court.

The history books -- you know, the ones that try to tell us that NASA really landed on the Moon  -- also claim that Hitler and Stalin made a secret agreement in August 1939. Nazi troops seized western Poland, while the Red Army grabbed the eastern half.

Not true, says the Russian court which fined a blogger 200,000 rubles (US$3,089) for claiming otherwise. The Perm regional court convicted Vladimir Luzgin under a Russian law that forbids glorification of Nazism.

Luzgin had posted a blog on Ukrainian nationalist leader Stepan Bandera and Ukrainian nationalist fighters who fought against (and sometimes collaborated with) the Nazis, while battling the Soviets, and, incidentally massacring Jews and Poles. Admittedly, by eulogizing Bandera (who was assassinated by the KGB in the 1950s), Luzgin wasn't likely to endear himself to a Russian court, or many other people for that matter.

However, what really got Luzgin in trouble was writing this passage:

“The communists and Germany jointly invaded Poland, sparking off the Second World War. That is, communism and Nazism closely collaborated, yet for some reason they blame Bandera who was in a German concentration camp for declaring Ukrainian independence”.

Luzgin was prosecuted under a law, signed by President Vladimir Putin in May 2014, that criminalizes "the denial of the facts" established at the Nuremberg war crimes trials, as well as the "dissemination of deliberately false information on the activities of the Soviet Union during the Second World War."

In other words, the Nuremberg tribunals never ruled that the Soviet Union had invaded Poland, and thus to claim there was an invasion is to defame Soviet actions during what Russians call the Great Patriotic War.

Let's leave aside the fact that the Nuremberg trials focused on Nazi war crimes. Because the Soviet Union was on the winning side, it therefore participated as a member of the prosecution, even though some decried the irony of Stalin's men judging others for committing atrocities.

Nonetheless, after the German invasion on September 1, 1939, the Soviet government declared that Poland no longer existed as a nation and that such a vacuum threatened Soviet security. On September 17, the Red Army crossed the border into eastern Poland, annexing territory that the Soviets had long considered their own. Their feelings toward Poland would later be seen in the Katyn massacre of 1940, when the Soviet NKVD secret police murdered 22,000 Polish military officers, policemen and educated professionals. After years of claiming that the Nazis did it, in 2010 the Russian Duma voted to blame Stalin for the killings.

Even when it comes to signing a treaty with a Nazi maniac who expressly swore to rid the world of "Jewish Bolshevism," one can argue that the Soviet Union was cynical but not irrational. After Britain and France had dithered for months in half-hearted negotiations to form an anti-Nazi alliance with the Soviet Union, it was obvious that they secretly hoped that the Germans and Soviets would kill each other and leave the West alone. So why shouldn't Stalin sign an agreement with Hitler to remain neutral while his Nazi and capitalist enemies annihilated each other, leaving the Red Army to eventually pick up the pieces?

Nor is it unprecedented for history to be criminalized. Germany banned sales of Mein Kampf until recently, and some form of law against Holocaust denial exists in 22 nations. Whether banning opinions on history, no matter how hideous or wrong the opinion, actually serves a purpose is another question. On the other hand, while to Americans this smacks of censorship, those people who suffered from fascism might understandably be sensitive to its depiction.

However, it would be one thing if today's Russian government acknowledged that the Soviet Union had illegally seized Polish territory, and then pointed out that the Soviet state no longer exists, and that Russia has moved on from Stalin's day. Yet by attempting to stamp out criticism of Soviet aggression, Russia is essentially announcing that it accepts responsibility for the historical legacy of the Soviet Union.