Russia Sends a Chilling Warning to America over Syria 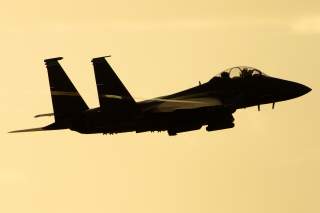 Russia is warning the United States firmly that it will not tolerate attacks on its military forces in Syria.

The Russian policy mirrors Washington’s own, but the Kremlin has never spoken so forcefully to reiterate that it will retaliate if its forces are attacked. However, the Russian policy only applies to the Kremlin’s official military forces rather than private military contractors (PMCs) that are also operating in Syria.

“If lives of the Russian officers are threatened, the Armed Forces of the Russian Federation will retaliate against missile and launch systems,” Gen. Valery Gerasimov, Russia’s chief of the general staff said.

If U.S. forces intervene in Syria and hit uniformed Russian military forces, the Kremlin is basically warning the United States that it will hit back and that there will be a war.

“A strike on Russian military forces means war, but also a strike near Damascus is likely to affect the Russian forces,” Vasily Kashin, a senior fellow at the Center for Comprehensive European and International Studies at Moscow's Higher School of Economics told The National Interest.

Michael Kofman, an analyst specializing in the Russian military at the Center for Naval Analyses, said the Kremlin is attempting to deter the United States from further intervention in Syria.

“I think this is an attempt to deter any U.S. machinations for a larger strike against the Syrian regime,” Kofman said. “Gerasimov is trying to draw a soft red line, and is making a rather overt threat. His intention is to make clear the likelihood of escalation and consequences should the U.S. attempt another al-Shayrat type strike.”

Kofman noted that in previous cases, the Russians have never used language such as this.

“Previously, however, Russia never made such threats,” Kofman said. “In earlier cases, Russia sought to reduce its stakes in the event the U.S. did go through with a military option, afraid it's hand might be called.”

Samuel Bendett, another Russia analyst at the Center for Naval Analyses, said that even though the Russians are upping the ante—they have left themselves with plenty of room to maneuver.

“Gerasimov stressed that its [Russia’s] forces are publicly present in the capital city and no attack from any quarter would be tolerated—or he was limiting the ‘attack vector’ to Damascus only and not on field conditions,” Bendett told The National Interest. “Given how many Russian assets are there in Damascus and in other major cities, this is a warning. But it could be read either way - either in Damascus only or in the field if Russian officers are easily identifiable or are known to be among the militias.”

Other analysts in Russia are skeptical of the entire situation.

Mikhail Barabanov, a researcher at Centre for the Analysis of Strategies and Technologies (CAST) and editor of the Moscow Defense Brief, the told The National Interest that both sides are posturing.

“I think this is more rhetoric, both sides periodically inflate their cheeks,” Barabanov said. “Not knowing all the details of the situation there, it's hard to judge. I think we will not know for a long time what is really behind the rhetoric in the relations between the parties in this case.”