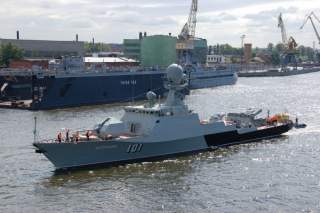 Two Russian warships are making a port call to Iran, according to local media outlets.

“The maritime relations between Russia and Iran will be expanded and we will go ahead with our official and unofficial visits to Iran,” Capt Kirill Taranenko, the head of the Russian fleet, said upon arrival. He added that the two sides planned to hold joint naval drills while there.

The ships arrived in Anzali on Friday and planned to stay for three days. Some 130 Russian sailors were part of the flotilla.

Anzali is on the Caspian Sea, an area where Iranian and Russian leaders have pledged greater cooperation in recent years. For example, during a speech in Russia last September, Iranian President Hassan Rouhani stated, “The Caspian Sea should be the center of development and welfare, and the symbol of peace, security and cooperation among our nations.”

This is the third time that a Russian flotilla has docked in the port in Anzali in the last decade. The first such visit occurred in 2007, while the second one didn’t take place until October of last year.

Rear Admiral Afshin Rezaei Haddad, the commander of Iran’s fourth maritime zone in the port city of Anzali, announced during the visit that an Iranian naval delegation would visit Russia in October of this year.

“Iranian forces will most likely pay a visit to Russia in mid-October,” Haddad said.

The visit comes at a time when Russia and Iran appear to be increasingly their military cooperation, a move that is likely to greatly unsettle the United States. For example, General Qassem Soleimani, the leader of Iran’s Revolutionary Guards’ Quds Forces, visited Russia last month where he reportedly met with Russian President Vladimir Putin. The trip, which Iran later confirmed but Russian officials continue to deny, violates the United Nations’ travel ban against General Soleimani.

"We have seen the same reports that you refer to. Qasem Soleimani is subject to a U.N. travel ban, and this travel ban requires all states to prohibit QS from traveling to their nation. The only exception to that is if the Iran sanctions committee grants an exemption. To our knowledge no such exemption was granted. We would know. So these are very concerning reports but we are still tracking down the facts," Samantha Powers, the U.S. ambassador to the United Nations, told reporters after the story first surfaced.

While in Russia Soleimani undoubtedly discussed the ongoing negotiations over a potential sale of Russia’s S-300 air and missile defense system to the Islamic Republic. Russia had earlier axed the deal for the S-300s under U.S. pressure but it is now trying to revive it.

Russia and Iran are also cooperating closely in trying to prop up the Bashar al-Assad regime in Syria, including by fighting the Islamic State. One Russian security expert who spoke to Reuters indicated that this was likely a topic of discussion between Soleimani and his Russian interlocutors.

"Russia is cooperating with Iranian authorities to stop Islamic State. Any meetings that help these efforts can only be good," the expert said, according to Reuters.

Since the signing of the Iran nuclear deal last month, there has also been a flush of renewed diplomatic activity over trying to find a negotiated settlement to the Syrian civil war. Possibly finding a way to ease out of the Assad government as part of a peace deal might have been one of the topics of discussions Soleimani had while in Moscow last month. As the leader of the Quds Forces, Soleimani is Iran’s point man on its policy towards Syria.