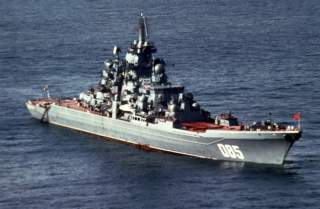 Russia’s United Shipbuilding Corporation (USC) is expected to sign a contract with the Kremlin to build a massive new warship called Project 23560 Lider (or Leader in English) after the design is finalized later this year.

"At present, Preliminary Design 23560 Leader is under consideration at the Ministry of Defense,” Igor Ponomarev, USC vice president for military shipbuilding told state-owned RIA Novosti. “After a positive decision, we expect to sign a contract to develop and design the ship under terms defined by the Ministry of Defense.”

The new warship is classified as a destroyer but will displace 17,500 metric tons, with a length of 200m (656.2ft) and a beam of 20m (65.6ft)—making it larger than most World War II-era heavy cruisers. Indeed, the Leader-class—which is expected to be armed with no fewer than 200 missiles—will be the second largest modern surface combatants built after the four massive 28,000-ton nuclear-powered Project 1144 Orlan battle-cruisers (better known as the Kirov-class).

The new warship is being designed with anti-aircraft, anti-ballistic missile, anti-surface and anti-submarine capability. It is also likely to have a significant land-attack capability using long-range cruise missiles such as the Kalibr-NK. From what little is known about the Leader-class, the vessels are expected to be equipped with 60 anti-ship cruise missiles, 128 anti-aircraft guided missiles and 16 anti-ship guided missiles. There are no details available about the exact mix of missiles that are expected to be carried onboard, but the air defense systems are likely to be based on either the S-400 or S-500 while some of the anti-ship weapons are likely to be variants of the Zircon hypersonic missile.

The Russians have not said much about the Leader-class’ propulsion system—but the vessel is expected to be nuclear powered and will likely reach speeds well in excess of 30 knots. It would also likely be able to remain at sea for up to 90 days without support. Late last year, the U.S. Navy’s Office of Naval Intelligence suggested that the Russians would build a dozen of the new warships.

“Depending on propulsion type, the design could be a 8,000 to 18,000 ton ship combining both destroyer and cruiser characteristics with robust air, surface, and submarine warfare, as well as anti-missile defense capabilities. Russia reportedly intends to build six such ships for both the Northern and Pacific fleets (12 total),” reads an ONI report on the Russian Navy. “The lead unit is not likely to be built earlier than the mid-2020s. Press reports have mentioned that the propulsion for this class, whether conventional gas turbine or nuclear, is not yet determined. The resolution may depend on decisions yet to be made regarding a new aircraft carrier which, if built, is likely to be nuclear-powered.”

Assuming that Russia can build the Leader-class given its current economic situation, the massive new warships would outgun the largest surface combatants in the U.S. Navy’s fleet—carrying roughly double an Arleigh Burke-class destroyer’s missile tubes. Moreover, the Leader-class’ nuclear propulsion system would allow the enormous new warships the ability to sortie around the globe without the need for auxiliary refuelers or any requirement to make a port call. That would afford Moscow a potent power projection tool that’s just short of a carrier strike group.