Russia Is Showing off Its Lethal Missile-Launching Tanks 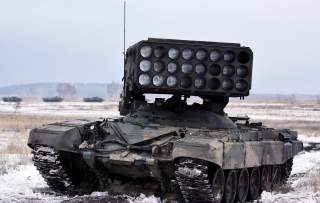 Risk or no risk, the TOS-1A remains popular, if a niche weapon given the firepower.

Lumbering with oversized, boxy turrets, TOS-1A Buratino thermobaric rocket tanks rolled out at the Shikhany training ground in southeast Russia in late October 2017. An array of tubes mounted on a T-72 tank chassis, the 45.3-ton Buratino is hardly a new weapon but one that has become increasingly popular internationally for its firepower.