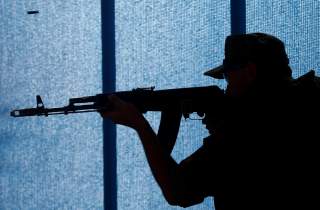 Russia’s Kalashnikov Group has tested a new unmanned ground combat vehicle called the Soratnik under “near” combat conditions. The Russian development points toward a future where armies will increasingly field unmanned systems during future conflicts.

"The Soratnik automated fighting vehicle has been tested in conditions maximally close to a real combat environment. These trials confirmed the vehicle’s characteristics and proved the possibility of using the robotic system at air temperatures of over 30 degrees Celsius," Kalashnikov Group told the TASS news agency.

There is no hard evidence that the Russians have tested unmanned ground vehicles in actual combat other than relatively basic explosive ordnance disposal/mine-clearing robots. While TASS says that the Soratnik was tested in Syria, available photographic evidence makes it very difficult to say one way or the other if that is indeed the case.

“Soratnik testing in Syria may have in fact taken place considering the mine clearing  UGVs that Russia has tested there and is planning to use from now on,” Samuel Bendett, a researcher at the Center for Naval Analyses who specializes in Russian robotics. “The absence of clear photographic evidence about Soratnik testing may have to do with the combat mission of that UGV as opposed to peacekeeping/de-mining missions of other UGVs.”

Eventually, the Russians hope to field a significant unmanned force and weapons like the Soratnik are harbingers of the future. “The Russians are testing a variety of unmanned systems for combat, developing test beds and putting them through rigorous trials,” Bendett said. “Russians are also publicly stating that unmanned systems will be a significant component of their military and of future warfighting.”

Apart from expeditionary missions, Russia might also use unmanned systems in regions with especially harsh climates such as the Arctic. “There have been many statements by Russian policy makers that unmanned systems are needed to assist with the country’s long border protection,” Bendett said. “So eventually this UGV may be tested as a vehicle to guard sections of the Russian border, in the north and in the Pacific regions.”

The Russians might use their UGVs in several potential roles—casualty evacuations, transporting various supplies or even fire support. “They have been talking about their UGVs supporting the warfighter in the evac, or transportation and combat assistance roles,” Bendett said.

Eventually, Russia could export these systems—but the technology is still immature and Moscow has yet to adopt the weapons into its own service. “Possibly, in a limited package that is different than the version that Russians themselves would be getting,” Bendett said. “After all, the Russians haven't actually received these into their own service yet—and the technology is not yet mature enough to talk about robust exports yet.”

Eventually, the Russians—and others—will field these weapons. The Pentagon will have to be prepared for that day.