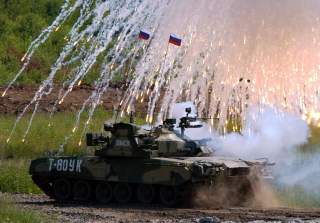 For Russia to have three tank types–the T-72 (A and B), T-80 (BV, U and UD) and T-90 (a rebrand of the T-72BU)–made no financial or logistical sense. Each tank had the same 125-millimeter 2A46M gun and similarly performing gun-launched missiles. But they all had different engines, fire control systems and chassis.

The author is a follower of various science fiction and modern warfare topics like small arms, armor, air power and Middle Eastern conflict.

This piece first appeared in War Is Boring here back in 2015.