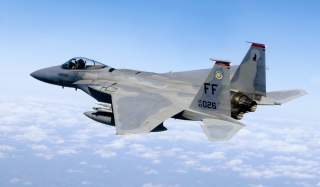 Perhaps the most advanced threat the F-15 is likely to encounter is the Russian-built Sukhoi Su-35 Flanker-E. While there are more advanced threats in development, those aircraft are likely to be too expensive to ever become commonplace. The Su-35 isn’t the most common potential threat out there, but there is a good chance it will proliferate.