Russia vs. America: What Would a Naval Clash over Syria Look Like? 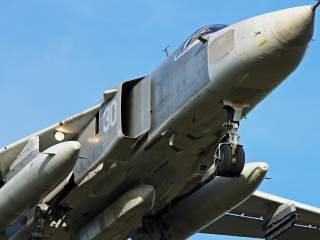 It feels like 1973 again in the Mediterranean Sea. That’s when the Soviet Navy administered a rude shock to Western navies in the Eastern Mediterranean, deploying a squadron that outnumbered the Italy-based U.S. Sixth Fleet during that year’s Arab-Israeli war. America sided with Israel, the Soviet Union with the Arab powers. For a time it appeared the Yom Kippur War might ensnare the superpower navies. In other words, war between small Middle East allies might embroil the U.S. Navy and Soviet Navy in combat.

Sound familiar? What appeared unthinkable not that many years ago—a Russian-American naval war—now looms as a distinct possibility. The Trump administration has vowed to punish the Syrian regime headed by “Animal Assad” for using chemical weapons against the regime’s enemies. For its part, Vladimir Putin’s government has vowed to protect its protégé from American assault. War could ensue if Washington and Moscow persevere with their stated aims.

Baseball sage Yogi Berra warns that “it’s tough to make predictions, especially about the future.” And so it is. Rather than contradict the great Yogi’s wisdom, let’s hazard some pre-takeaways from a Mediterranean clash of arms.

One, never discount Russian resolve to construct a great navy. The 1973 Arab-Israeli war was far from the first rude shock the Soviet Navy administered to NATO mariners. In 1970—under a decade after Fleet Admiral Sergei Gorshkov and his political masters resolved to make the Soviet Union a serious oceangoing force—the Soviet Navy staged naval maneuvers dubbed “Okean 70.” The Northern, Baltic, Black Sea, and Pacific fleets fanned out at the same time, not to mention a squadron in the Indian Ocean. Over 200 ships and submarines took part in all. And this was a youthful force. Most of the units underway for Okean 70 were under 20 years of age.

George Baer, a former chairman of my department, sums up the American response in his understated way: “This exercise impressed the U.S. Navy.”

And how. That same year Soviet warships surged into the Mediterranean Sea to stage a show of force during a crisis in Jordan. Sixth Fleet commander Isaac Kidd exclaimed that the middle sea looked like “an international boat show” as Soviet and American ships crowded its eastern reaches. There’s a lesson here. It’s commonplace for dominant seafaring states—the United States, or Great Britain in its heyday, or the Dutch Navy before that—to disparage new contenders for maritime mastery. It hasn’t been many years since China-watchers wrangled over whether continental China could put a great fleet to sea. (It has, therefore it can.)

Furthermore, American seafarers had a good laugh at the Soviet Navy’s expense after the Cold War, jeering at the ill-handled, ill-maintained Soviet vessels they had encountered on the high seas. The 1990s—when the Russian Navy rusted at its moorings, unable to pay its sailors—did little to disabuse Americans of their triumphalism at the Cold War’s outcome. But recalling the Soviet Navy’s ascent under Admiral Gorshkov’s stewardship should give us pause. Denigrating one’s antagonists seldom makes a sound starting point for strategy.

But two, never overestimate Russian endeavors on the high seas. American sailors of Cold War vintage remember that—far from deprecating the Soviet foe—we tended to make him ten feet tall in our estimates of the naval balance. Today’s Russia is not an economic superpower that can afford a fleet like the one that took to the seas in 1970 and 1973. Its navy appears to excel in certain domains, notably undersea warfare, but economic malaise keeps Moscow from building excellent armaments in bulk. Quantity no longer holds the same quality it did during the Cold War. Nor is it clear whether the Russian Navy has overcome the troubles with seamanship, tactics, or material upkeep that afflicted the Soviet Navy of old.

Third, geography matters. Franklin Roosevelt liked to instruct Americans to “look at your map,” and that’s wise counsel when contemplating diplomacy and strategy. Gazing at the map reveals that any fight between Russian and U.S. forces will take place in cramped quarters amid intricate offshore terrain. Neither navy has deployed large forces to Eastern Mediterranean waters as of yet; it’s doubtful they will mount deployments on the scale of the Middle Eastern crises of the early 1970s. After all, each navy is a fraction of its Cold War size. The Mediterranean Sea will host no international boat show this year.

And yet this comes as cold comfort. Any sea battle will take place within reach of land-based sea power—aircraft flying from airfields ashore, along with anti-ship cruise missiles—emanating from multiple axes. In 1973, notes Professor Baer, Soviet warbirds could “attack Sixth Fleet units with land-based air flying from four directions”—including, yes, from Syria. And that was before anti-ship missiles had achieved their current long range, precision, and lethality. Nor would Russian ships cruising within reach of NATO airfields be immune from shore-based sea power.

One sympathizes with naval commanders compelled to guard against attack from all points of the compass, not to mention above and below. It’s become an axiom of sea combat that the combatant that strikes effectively first is the probable victor. In tight confines, where flight times for incoming aircraft and missiles are short, the impulse to launch weapons first could grow intense. The relatively small, congested battleground combined with the hitting power of modern weaponry wielded by coastal states adds up to serious potential for escalation.

Which, four, brings us to the beginning of maritime strategy: what purposes would drive Russian and American forces in a Mediterranean imbroglio? Judging from the words issuing from Washington and Moscow, U.S. sea and air forces will pound sites related to the Syrian chemical arsenal, along with delivery systems used to carry out unconventional attacks. The U.S. Navy will go back to its post-Cold War playbook—using the sea as an offshore safe haven from which to carry out missile strikes. The Syrian Air Force is in peril.

For their part Russian forces will try to deny American forces the use of that nautical sanctuary while batting down such American missile and air attacks as do find their way into Syria. That is, the Russian Navy and affiliated shore-based forces will mount a “sea-denial” effort from sea and sky. Sea denial is a defensive strategy deployed by weaker powers. It’s meant to fend off stronger adversaries from important expanses without wresting away command of those expanses for the defender. It is effective but unambitious.

In short, the U.S. Navy and Russian Navy field imposing fleets backed by land-based implements of maritime might. Any naval engagement would take place in intensely demanding surroundings. And, to all appearances, neither Washington nor Moscow sees any compelling stake in such a fight. Sobriety may prevail once reality sets in among political and military leaders—in both capitals—as it did in 1973.