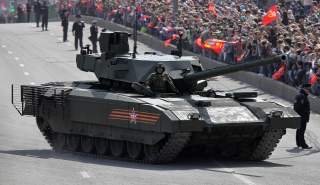 During the Cold War, the Soviet Union organized its vast academic and industrial resources to achieve scientific and industrial breakthroughs for the nation’s military forces. Locked in the global struggle against Washington’s massive military-industrial complex, Moscow needed its best and brightest citizens working on a vast array of technologies and principles to match and potentially “overtake” its rival.

Much of that science-and-technology and research-and-development work was conducted across Soviet universities and scientific institutions – while a massive amount of work was done at secret science cities spread across the country.

These cities — some with tens of thousands of inhabitants — were usually centered around a specific S&T laboratory or an institution dealing with work such as nuclear, biological, chemical research, rocket and ballistic technologies, development and testing of various weapons, and many other activities carried out in the service of the “state and nation.”

The work in these locales was classified, and those working and living there were kept under “lock and key” — under constant guard, with entry and exit closely guarded and controlled by the Soviet security apparatus. Many of these self-contained and fully functioning cities were not even on any public maps.

Today, after a quarter-century, Russia is returning to a similar principle with the announcement of a “technopolis” technology city to be constructed near Anapa, close to the Black Sea. Russian defense minister Sergei Shoigu first announced this initiative, “Era,” during one of the teleconferences he hosts regularly with the nation’s armed forces.

The plan outlined by Shoigu is for “young scientists and graduates of scientific military companies, as well as representatives of scientific research institutes and the military-industrial institutions to work at the ‘technopolis’ in the interest of the armed forces,” RedStar.ru, the official news portal of the Russian military, cites the defense chief as saying.

According to Fedor Dedus, the designated director of the technopolis, the city’s specialists “will concentrate on the following initiatives: information and telecommunication systems, artificial intelligence, robotic complexes, supercomputers, technical vision and pattern recognition, information security, nanotechnology and nanomaterials, energy tech and technology life support cycle, as well as bioengineering, biosynthetic and biosensor technologies.”

Russia’s ministry of defense is planning for over 2,000 scientists and engineers to work at the site by 2020.

According to First Deputy Defense Minister Ruslan Tsalikov, by the end of this summer the first set of Era’s laboratories should be completed, along with the living quarters for the staff. “We need to ensure MOD plans to attract various private sector technology companies to work on site,” said Tsalikov. The official opening of Era is scheduled for Sept. 1, 2018, with a number of companies planning to start work there by the end of this year.

The technopolis will feature all available social comforts for young specialists and their families, including shopping venues, schools, kindergartens and public transport – just like the Soviet “secret cities” did decades ago.

Era’s success, however, depends in large part on whether the Russian government has learned from its previous efforts in creating another type of technopolis in Skolkovo, outside of Moscow, in an effort that was supposed to build Russia’s own Silicon Valley for technology innovation and breakthroughs. Launched with great publicity and government support in 2010, that effort has since fizzled out, unable to generate the very technological breakthroughs initially promised by Moscow, such as nanotechnology innovation.

What may distinguish Era from other attempts at concentrating academic and technical expertise in a single locale is its MOD oversight, with Russian defense officials aiming for streamlined, start-up-like approach to developing breakthrough concepts. A recently-created MOD bureaucracy already aims to oversee specific technology development — such as unmanned systems — while at the same time recognizing the need for civilian and military S&T communities to work together.

Can Era be as successful as its planners hope? Only time will tell. What’s clear is that the Russian defense establishment is very serious about developing technological sophistication that will enable its forces to marshal the latest technologies and concepts. Already, hundreds of science and technology departments across military universities and institutions in Russia are engaged in high-tech development and research on topics such as artificial intelligence.

Era’s real test will be its ability to augment existing S&T and R&D efforts, while giving young scientists and engineers enough support to turn their efforts into real results. Should that happen, Era’s example may be replicated across the country. If it doesn’t, Russia’s new tech city may become another casualty of the Kremlin’s heavy-handed efforts to foster technological innovation.

Samuel Bendett is a fellow in Russia studies at the American Foreign Policy Council. The views expressed here are his own.