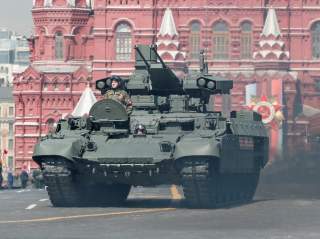 One of the more interesting parts of the most recent Russian “State Defense Order” (GOZ) is the adoption of the BMPT (Infantry Fighting Vehicle – Tank). Twelve BMPT armored fighting vehicles have been ordered, marking the first time the Russian military has actually ordered a dedicated heavily armored infantry-suppression vehicle. Such vehicles have been in development since the 1980s, as a result of the Soviet war in Afghanistan. Multi-turreted, bristling with weaponry and featuring crews of up to seven people (more than twice the standard Soviet three-man tank crew), these designs could be seen as a partial revival of the “land battleship” concept that the Soviet Union developed in the 1930s. The original designs for the BMPT, Object 781, had two independently targetable thirty-millimeter cannons and two independently targetable thirty-millimeter grenade launchers, in addition to coaxial machine guns and smoke grenade launchers. Despite having multiple prototypes completed, the Object 781 was not adopted. But with an insane amount of firepower—six independently targetable guns—could this vehicle be even better than the currently adopted BMPT?

Proposals to create an antipersonnel tank with autocannons and machine guns first appeared in the 1950s, following successful employment of self-propelled antiair guns during World War II against ground targets. These ideas were not taken seriously until the Soviet war in Afghanistan. In Afghanistan, main battle tanks like the T55 and T62, as well as IFVs such as the BMP-1, had trouble hitting and suppressing infantry targets due to the slow rate of fire and limited angles of fire offered by their primary armament. The BMP-2 was largely designed with these lessons in mind, packing a thirty-millimeter autocannon that could elevate far further than the low-velocity gun on the BMP-1. However, the primary role of the BMP-2 was still an infantry fighting vehicle meant to fight along the infantry, providing additional anti-infantry firepower and heavy antitank firepower. The Object 781, on the other hand, was meant to support tanks against infantry, a role reflected in its original project name as a “mountain tank” before it gained the BMPT designation.

In order to fulfill this role, the Object 781 is based on the T72B chassis. The main turret is removed and replaced with two independently stabilized turrets for infantry suppression. Each turret has a 2A72 thirty-millimeter autocannon, a 7.62-millimeter PKT machine gun and a smoke-grenade launcher. The right turret also has a dual “Konkurs” launcher in addition to those armaments to tackle armored targets. The 2A72 autocannon is a lighter, more compact version of the 2A42 thirty-millimeter autocannon used on the BMP-2, that utilizes dual-feed technology to instantly switch from AP to HE rounds. Unlike the 2A72 mountings on the BTR-80A, the gun is encased in a support frame for protection from damage. Each individual turret has 550 rounds of thirty-millimeter ammunition, presumably loaded in two trays, with the larger tray being reserved for AP and the smaller tray for HE, and two thousand rounds for the PKT. There were provisions to mount two grenade launchers on the hull—either the thirty-millimeter AGS-17 “Plamya” or the forty-millimeter AGS-40 “Balkan,” mounted on the left and right side above the tracks on the widened hull.

In addition, on some variants of the Object 781, there were provisions for additional PKTs in the rear of the hull to further cover the vehicle’s side arcs from infantry fire. Unlike the primary turrets, the AGS and PKTs in the hull were not stabilized in any form, although the side AGSes used a remote weapons station to be operated from the gunner’s stations inside the hull. In order to operate all of these weapon systems, the Object 781 had a crew of seven men: one driver and one man for each turret. Additional variants of the 781 were created with a single turret that sported a low-velocity 2A70 gun in addition to a 2A72 autocannon, in a configuration roughly similar to that of the BMP-3, although the turret itself is a different design. The 2A70 can fire hundred-millimeter high-explosive shells as well as ATGMs through the gun barrel. Some sources call this the Object 782, but others state that this was simply another variant of the 781. The hull AGS and PKT are retained on this version of the 781.

In any variant, the Object 781 would be a formidable vehicle. During trials, the version with the dual thirty-millimeter turrets proved to be superior to the version with the single hundred- and thirty-millimeter turret. The version with dual thirty-millimeter turrets could engage up to six different infantry targets at the same time, including tackling a light vehicle at the same time as infantry targets—something the current BMPT cannot do with its single turret with dual guns. The independent turrets also give the Object 781 a faster rate of fire than the current BMPT. The current BMPT has dual autocannons in one turret, but each autocannon isn’t independently targetable, and each autocannon only fires one type of ammunition. Thus, in a combat situation the BMPT would likely only one autocannon at a time because the ballistic trajectories of AP and HE rounds diverge greatly past close range. The Object 781 lacks this limitation, as it can effectively engage a target with HE rounds from both autocannons at once. While not stabilized, the hull-mounted AGSes are also effective infantry suppression weapons that were combat proven in Afghanistan. The current BMPT does have superior antitank capability; it has four missiles ready to go, compared to the Object 781’s two. The missiles on the current BMPT are also more modern than those on the Object 781.

Despite its many advantages, the Object 781 did not enter pilot production, due to the closure of the military branch of the Chelyabinsk Tractor plant. All materials were shipped to the Uralvagonzavod (UVZ) plant, where they lingered. Interest in an antipersonnel tank was only resurrected after Russia’s military experience in Chechnya. From that came the modern BMPT design, under the name Object 199. The Object 781 prototype was restored and now resides in the UVZ tank museum.