Russia is Working on a New Stealth Fighter 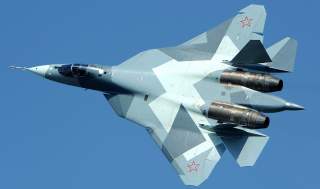 According to a posting on the BMPD blog—a product of the Moscow-based Center for the Analysis of Strategies and Technologies—the LMFS will use a canard configuration reminiscent of the now-defunct Mikoyan Project 1.44 design, which was developed in the late 1980s as the Soviet Union’s answer to the Lockheed Martin F-22 Raptor.

As currently envisioned, the new fighter will be equipped with a pair of the Klimov VK-10M afterburning turbofans—which are advanced derivatives of the MiG-29-series’ RD-33 powerplant—rated at 22,000lb thrust each. That should enable the aircraft to reach speeds of between Mach 1.8 and Mach 2.0 with a range of 2485 miles when configured with external droptanks.

It is possible that Mikoyan may revise the design into a single-engine configuration if the PAK-FA’s next-generation izdeliye 30 engines reach a suitable level of maturity in time. There are few details available about the izdeliye 30 engines, but the new powerplant is expected to deliver 24,054lbs dry thrust and 39,566lbs of afterburning thrust.

Only time will tell if Russia and RSK-MiG can shepherd the LMFS into production. Developing a fifth-generation fighter is a long and expensive endeavor as the Sukhoi is discovering with its T-50 PAK-FA air superiority aircraft.