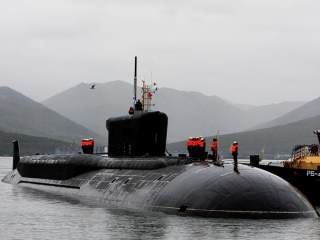 The Russian Navy is set to conduct a massive live-fire nuclear exercise on a scale not seen since before the collapse of the Soviet Union.

Two new 24,000-ton Project 955 Borei-class ballistic missile submarines are participating in the exercise. Of the two Northern Fleet boats participating—Yury Dolgoruky and Vladimir Monomakh—one will sequentially launch its entire payload of sixteen RSM-56 Bulava missiles in a drill that replicates the Soviet-era Begemot II exercise which took place in August 1991—reports the Russian media outlet Izvestia. It’s not clear which of the two boomers will conduct the test.

The Russians want to confirm that the new submarines will be able to launch all sixteen ballistic missiles in sequence from a depth of 164ft while the boat is operating at sea states of between six and seven. At those sea states, waves can be anywhere from 13ft to 30ft in height.

This is the second time Russia has attempted to launch all sixteen missiles sequentially from a Borei. According to Izvestia, Vladimir Monomakh made the attempt last year but aborted after taking only two shots because one Bulava missile self-destructed while the other did not meet accuracy standards even though it reached the test site in Kura. The remaining Bulava missiles were sent back to the manufacturer where it was discovered that some of the missiles were defective due to poor workmanship.  Thus far, the Russians have not had much luck with the Bulava, with only fifteen out of twenty-four launched being completely successful, Izvestia reports.

Because of the previous failures, the Russians are watching the performance of the Bulava’s rocket motor closely during this test. Russia or the United States would only ever launch every missile onboard a boomer during a full-scale nuclear war—either as a retaliatory strike or launching an offensive first strike.