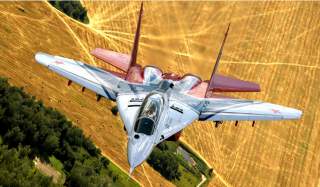 Russia’s RSK-MiG is developing a host of unmanned aerial vehicles (UAV) including strike and reconnaissance models, some of which could be fighter-sized aircraft. If the project goes as planned, the company hopes to build and fly prototypes over the next several years.

MiG hopes to develop three classes of unmanned aircraft. Those would range from the one-ton to five-ton class, to the five to ten ton class and the ten to fifteen ton class. All of the aircraft would be powered by indigenously developed engines, which are currently in development according to Kravchenko.

RSK-MiG’s plans to develop unmanned aircraft are part of the company’s struggle to stay relevant after years of declining sales for its signature MiG-29 Fulcrum series aircraft.

“This is MiG’s chance to prove its relevance in the rapidly evolving UAV market in Russia,” Samuel Bendett, a researcher specializing in Russian unmanned systems at the Center for Naval Analyses, told The National Interest. “Years ago they were supposed to deliver a combat model [called Skat] which never materialized. If they don’t deliver here, they may never get to take part in future projects.”

But while MiG has ambitions to become a powerhouse in the UAV market, the company might not have the capability to deliver on those promises. “Their promises are very ambitious and they actually exceed their abilities,” Bendett said. “Just because a design bureau has concepts on the drawing board doesn’t mean they will eventually materialize like MiG’s own experience with Skat.”

MiG might eventually realize its ambitions, but it will take years of development work and it will cost money. It is not entirely clear that MiG has the money to pull off such an endeavor—especially without financing from the Russian Ministry of Defense. “What they’re planning is going to be rather expensive,” Bendett said.

The Russian Defense Ministry still has to decide on what kinds of unmanned aircraft it will buy for its forces. That’s particularly true for the large high-value combat UAVs. When the Russian Defense Ministry does decide on what kind of UAVs it wants, MiG will have to convince the Russian government to buy its planes. There will likely be a competition for such a Russian government purchase.

“They may eventually get there but again this will take years,” Bendett said. “And it will depend on which particular combat UAV the Ministry of Defense will eventually buy.”

In the end, MiG’s UAV development plans might have as much to do with the company’s efforts to remain independent of arch-rival Sukhoi as much as it does with developing new products. At this point, MiG has no choice but to roll the dice as struggles to develop new products beyond derivatives of the Soviet-era MiG-29 Fulcrum.