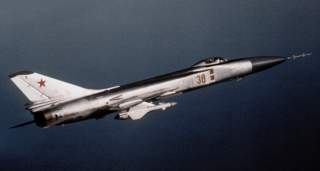 The April 1978 shootdown of Korean Air Lines Flight 902 by a Soviet Su-15 fighter plane—which killed two passengers but spared 107 others—distressed the Soviet air force, not because it had shot down a civilian airliner, but rather that it had gotten so far into Soviet airspace before being intercepted.

Five years later, a second encounter between Su-15s and a Korean airliner would result in far heavier loss of life.

On Aug. 30, 1983, KAL Flight 007 departed from John F. Kennedy International Airport in New York, bound for Seoul with 269 crew and passengers aboard. The 747 airliner made a refueling stop at Anchorage, Alaska, where the crew was informed that one of radio navigation beacons the flight computer usually relied on was non-functional.

The crew was supposed to switch the computer to follow the a gyroscope-based Inertial Navigation System, but for some reason it was not properly reset. Thus, when the plane missed the beacon, its autopilot remained fixed on a straight-line heading mode which led it hundreds of miles off course towards the Kamchatka peninsula, which served as a base for Russian nuclear forces.

Cold War tensions were at peak that year, and an American RC-135 reconnaissance plane had snooped just outside the Kamchatka airspace earlier that day. When Soviet radars detected the approaching jumbo jet, the Soviet Air Defenses Forces (PVO) scrambled four MiG-23 interceptors to deal with the interloper.

However, heavy winds had disabled several of ground-based defense radars in the region, and without full coverage the Soviet fighter planes could not locate the airliner. The MiG-23s returned to base, short on fuel. This was in part due to a policy of limiting the fuel load on standby aircraft after defector Victor Belenko flew his MiG-25 all the way to Japan in 1975.

Thus, a jumbo jet flying at high altitude in a straight line, making no evasive maneuvers, managed to confound the Soviet air defense system and soar across the Kamchatka peninsula and back into international airspace. PVO commanders were hopping mad at the failure.

Declassified transcripts of the conversation between Gen. Valery Kamensky, commander of the Eastern District of the PVO, and his subordinate Anatoly Kornukov reveal that the former was ready to shoot down the escaping airplane over international airspace—after confirming it was not a civilian plane. Kornukov, however, felt that the intruder was clearly a military spy plane, and advocated a shoot-first approach.

Unfortunately, Flight 007’s straight line path took it back over Soviet airspace as it overflew the Sakhalin islands. The PVO had a new wave of three Su-15s and one MiG-23 ready to catch the intruder. Radio communication transcripts reveal that around 6:12 UTC, the Soviet fighters entered visual contact with Flight 007 and began acquiring missile locks.

Years later, Soviet pilot Genadi Osipovich recalled seeing the 747’s running lights and the row of lit windows along the passenger compartment. “I knew it was a civilian plane,” Genadi admitted in an interview with Izvestia, but “but it is easy to turn a civilian type of plane into one for military use.”

The 707 airliner is indeed the basis for a number of American reconnaissance planes. However, there are no espionage variants of the 747, which has an iconic humped profile.

In any case, Genadi did not tell his commanders that he had intercepted an airliner, and they did not ask him to I.D. the plane. They did instruct him to fire several warning bursts with his underwing cannon pods. Genadi fired more than 200 23-millimeter shells across the airliner’s nose, but the shots likely went undetected by the airliner crew, as his weapons lacked tracer ammunition.

Around this time, the Korean pilot even radioed flight control in Tokyo that he was climbing for reasons of fuel economy, without ever mentioning the Russian fighters. The Soviets perceived this as an evasive maneuver, which was seen as an admission of guilt.

Flight 007 would soon be exiting Soviet air space, so the PVO instructed Osipovich to “Destroy the target.” Like Kamensky before him, Osipovich was actually too close to use his missiles against the slow-moving airliner, and he had expended his cannon rounds on the warning shots. He instead dove a mile below the airliner, flipped his plane back up using his afterburners and successfully acquired a missile lock from below.

Two R-98 missies—an evolved variant of the R-8—streaked upwards toward the Boeing. One of the missiles detonated its large 88-pound proximity-fused warhead around 50 meters behind the 747’s tail. The blast severed the airliner’s elevator cables, disabled one of the four turbojet engines, and knocked out multiple hydraulic systems.

The damaged elevator cables actually caused Flight 007 to climb to higher altitude. The flight crew reported the damage to Tokyo and managed to keep their mortally wounded plane airborne for a dozen more minutes before the Boeing spiraled into the Sea of Japan near Moneron Island.

The shootdown became a flashpoint of the Cold War. Moscow initially denied knowing anything about the disappeared plane. However, Reagan decided to release the radio-intercepted communications between the Soviet pilots and their ground controllers—a capability the U.S. military had kept secret until then—in order to embarrass the Soviets.

Moscow eventually admitted to the shootdown, but even then, the Soviet account contained numerous “small lies” as Maj. Osipovich later admitted.

Meanwhile, Reagan played up the incident to rally anti-Soviet sentiment internationally, leading to a flurry of tit-for-tat diplomatic reprisals in the United Nations and the deployment of Pershing II nuclear missiles in West Germany. Soon, rival Soviet and Western rescue fleets clashed in the Sea of Japan as they searched first for survivors, and later bodies and wreckage, including the flight’s black box flight recorders.

By the end of the month, the Soviets turned over to Japan more than 200 shoes and other bits of luggage from Flight 007’s passengers. They found little in the way of human remains.

The Soviet Union never formally apologized for shooting down Flight 007, maintaining it had been involved in a spy flight. However, the United States also refused to apologize five years later when the U.S. Navy cruiser USS Vincennes mistakenly shot down Iranian Air Flight 655 over the Persian Gulf, killing all 290 on board.

For years, the Flight 007 shootdown generated numerous conspiracy theories attributing the airliner’s aberrant flight path to a nefarious CIA espionage plot. But shortly after the fall of the Soviet Union, the Russian government revealed it had secretly located the wreckage of Flight 007 seven weeks after the incident and had recovered the Black Box flight recorder.

Because the flight recorder failed to support the Soviet account, Moscow maintained a fake salvage mission to give the impression it was unaware of wreck’s location.

Russia finally shared the black box with the international community in 1992. The recording revealed the South Korean crew to be in a relaxed mood, completely unaware they were far off course and in mortal peril until after the missile struck their plane. It also revealed the jumbo jet had likely been hit while flying over international airspace.

And two weeks after the accident, Reagan announced he was making Global Positioning System technology freely available for civilian use due to the mind-boggling navigational errors which led to the tragedy. Prior to that, GPS had been reserved for the military.

Thus, the Google Maps app in your smartphone owes its existence in part to the over-zealousness of the Soviet Air Defense Forces.

Of course, GPS would likely have ended up in civilian use one way or another—but the Flight 007 catastrophe was the catalyst that finally made civilian GPS a reality, and may have facilitated its earlier adoption.

Deadly dogfight over the Baltic

Little less than a year after the Flight 007 shoot down, another Su-15 chased an Airbus 310 airliner 30 miles into Swedish territory. The Soviet pilot even reported that he had locked air-to-air missiles on the “spy plane”—until he realized he had made a serious navigational error.

In fact, the airspace over the Baltic was a hotbed of activity for both Scandinavian and Soviet air arms. Swedish Viggen fighters frequently shadowed Soviet aircraft and even closed within a few meters to take pictures of the flight crew as they practiced mock attacks on American carriers.

The Soviets sometimes reciprocated with photos of their own. You can see some of the remarkable images in this Swedish Daily article. However, one of these routine encounters ended disastrously, as recounted by Swedish fighter pilot Göran Larsson in Flygrevyn magazine.

On July 7, 1985, Larsson flew his Sh-37 Viggen maritime reconnaissance fighter over the Baltic using his nose-mounted surveillance camera to photograph Soviet ships performing a naval exercise. While he recorded his images, two Su-15TM Flagons swooped toward him, one of them falling in close beside him as he proceeded with his mission.