This Russian Nuclear Submarine Made Some Scary History (It Sank Not Once, but Twice) 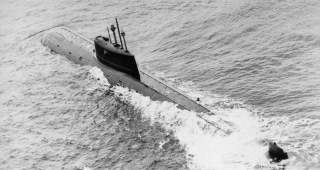