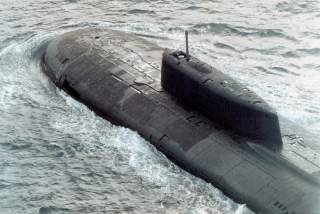 Russia’s recent focus on remilitarization of the Arctic has raised many eyebrows in policy circles. In addition to reactivating old bases in the Arctic Circle, and building more nuclear icebreakers, Russia is modernizing its approach to Arctic operations. Recent reports show that Russia is taking steps to deploy the Harpsichord (Klavesin) series of Unmanned Underwater Vehicles (UUV) in the Arctic, by refitting some submarines to carry and employ them. Unlike smaller UUVs that were used before, the new UUVs are large and possess the capability to dive to great depths. But what are these UUVs used for, and what might their deployment imply?

The proposed carrier submarine for this new generation of Russian UUVs is the Project 09852 Belgorod. This submarine is being modified to accomplish a variety of covert special missions and is speculated to carry the new Harpsichord-2R-PM UUV. At 6.5 meters long and one meter in diameter, this Harpsichord-series UUV is fairly large for an UUVs. It has a range of around fifty kilometers and a diving depth of around six kilometers. It is packed with side-scanning sonar arrays, allowing it to search and map the seabed in great detail. It also appears to be a successful and functional system, with TASS reporting successful tests in the Black Sea in 2016.

The Harpsichord series of UUVs are not new designs, the older Harpsichord-1R was successfully used in naval trials in 2007 from the icebreaker Rossiya. It is slightly smaller than the Harpsichord-2R-PM, at only 0.9 meters in diameter and 5.8 meters in length, and possesses a similar sensor suite. It was also used in the Sea of Japan and in the Kamchatka deep-sea trench. The Harpsichord-1R is also rumored to be deployed on another “special missions” submarine, the Project 09787 Podmoskovye (BS-64). The deployment of UUVs on these special mission submarines appears to be in support of their larger task  the monitoring and deployment of an Arctic sensor net, codenamed Harmony. As both the Belgorod and Podmoskovye have manned midget submarines that can perform utility and construction/installation tasks, the UUVs would likely perform surveys prior to the installation of these sensor nets, as well as assisting in other special missions such as the recovery of other UUVs and materials from the seabed. It is also rumored that the new Oscar-III (Project 949AM) Submarines can carry Harpsichord-2R-PM UUVs as reconnaissance support for their SSGN mission. The Podmoskovye is also slated to be re-equipped with the newer Harpsichords as well.

While the Harpsichord series of UUVs are unarmed, Russia has also been developing a series of combat UUVs, the most famous of which is the Status-6 (Kanyon). This UUV has one purpose: the delivery of a nuclear payload to a shore-based target. It accomplishes this autonomously, diving to a depth of around a thousand meters to avoid countermeasures and utilizing collision avoidance sonar to make its way to its target. The new Belgorod submarine is among those that are suspected to have the capability to launch this new combat UUV.

Overall, these developments in both the Harpsichord and Status-6 show that Russia is pursuing a more aggressive strategy towards its remilitarization of the Arctic. The development of the utility/construction UUVs in support of the sensor net and gas exploitation operations would allow Russia to secure and economically develop the Arctic. These robots also were mentioned in the context of “robotized” security, which might imply that they have a limited patrolling and surveillance function. Given their ability to be deployed from a variety of platforms including icebreakers, Harpsichord UUVs significantly bolster the ability for otherwise civilian ships to conduct patrol and border protection. The Status-6 combat UUV adds another weapon to Russia’s nuclear-deterrent arsenal.