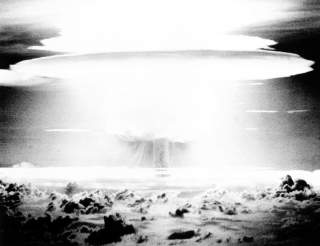 The Soviet Union's swift strides towards nuclear arms alarmed American officials in the 1950’s. "First Lightning" (called "Joe-1" in the West)—the first Soviet nuclear test—announced the Moscow's new military power less than three months after lifting the Berlin Blockade in May 1949. The twenty-two-kiloton shot copied the U.S. Trinity test as closely as possible to achieve early success; the rushed development actually stalled the Soviet program for over a year, with the second test occurring in September 1951.