Russia's 6th Generation Stealth Fighter Will Be a Hypersonic Beast 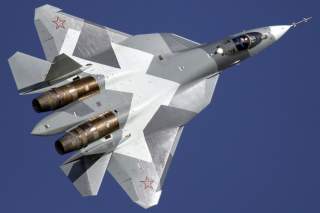 Russia’s United Aircraft Corporation (UAC) expects to fly a hypersonic “sixth-generation” fighter before 2025. However, Russia has yet to field an operational fifth-generation aircraft, and Moscow’s prospects for developing a sixth-generation warplane with hypersonic capability would seem to be fairly remote.

“We expect that the sixth generation aircraft will fly before 2025,” Vladimir Mikhailov, chief of United Aircraft Corporation’s military aircraft directorate, told the Moscow-based TASS news agency. “It will make its first flight—as we plan—no later than two to three years after 2020.”

Mikhailov—a former commander of the Russian Air Force—told the news agency that UAC has already completed the concept definition for the new warplane. Indeed, research on the new sixth-generation fighter—to include engineering design—is well underway according to Mikhailov. Mikhailov added that Russia plans to equip the prospective new warplane with long-range hypersonic missiles.

But the Russians are not just aiming to equip the new fighter with hypersonic weapons; Moscow is designing its sixth-generation airframe to be capable of hypersonic speeds. “It will be hypersonic at several Mach, single-seat, invisible to the enemy, super-maneuverable, multifunctional and made of composite materials,” Mikhailov said. “The aircraft will have a cockpit, but will be able to fly with both a pilot and without a pilot. That is, it will combine a manned and unmanned variant.”

"They have really come up with the designs for the creation of a sixth-generation fighter,” Russian deputy Prime Minister Dmitry Rogozin told the Moscow-based TASS News agency in March. “I’m referring also to new design concepts briefly presented by the Sukhoi design bureau and by the general designer appointed for all aircraft systems and armaments.”

But while Russia has grand ambitions to build a hypersonic sixth-generation stealth fighter, it is less clear if Moscow has the financial wherewithal to fund such lofty goals. Moreover, there are real questions about the technical feasibility of hypersonic warplanes given that there are many material sciences challenges that have yet to be overcome. Indeed, the United States, for example, has struggled to build a hypersonic test article that can survive more than a few minutes at those speeds. That’s mostly because materials that can survive those kinds of temperatures don’t exist yet—unless Russia has made some sort of heretofore-unknown technical breakthrough.

Meanwhile, Russia’s fifth-generation Sukhoi T-50 PAK-FA program is limping along. The stealthy fifth-generation warplane is expected to complete the Russian military’s state trials sometime this year. Sukhoi is set to begin deliveries of production PAK-FA aircraft to the Russian Air Force in 2017.