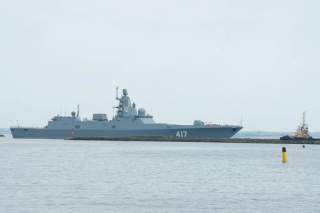 There have long been reports that the ongoing delays with the commissioning of the Admiral Gorshkov frigate have to do with defects in its air defense systems. These were thought to be primarily related to problems with integration of the Poliment Redut air defense missile system. The Poliment system was designed to be Russia’s answer to AEGIS, with four phased array antennas that are able to track 16 targets at the same time. The Redut system consists of four or eight vertical launch systems that launch three types of missiles. The 9M100 is the short-range missile, with a range of up to 15km. The 9M96M is the medium-range missile, with a range of 40-50km. Finally, the 9M96 long-range missile is supposed to have a range of up to 150km.

It now appears that the Redut’s problems are much more serious than just integration. Arecent report notes that the Ministry of Defense has stopped trials of the system because of continuing problems with the 9M96 long-range missile. Specifically, the missiles appear to fail after three seconds of flight. Some reports indicate that the Redut system works well hitting targets up to 40km away, but fails in the long range. The implication is that the short and medium range missiles work well, but the long range missile does not. Nevertheless, this may be an improvement over previous results, as trials of the Redut system on the Steregushchiy class corvettes in 2014 showed that they were only able to hit targets at distances of up to 15km because the medium-range Furke-2 radar system was not functioning properly.

Instead of further trials, the problems will now be sorted out by an inter-agency commission, a sure sign that the problems are serious and are not expected to be fixed any time soon. The problems stem from issues at the design bureau, which is reportedly not up to the task of designing a missile with the requirements provided by the Defense Ministry. The Fakel machine design bureau, which is developing the missiles is supposedly in relatively poor condition, using technologies and equipment left over from the Soviet period.

Redut systems are supposed to be installed on both the Admiral Gorshkov frigates and the Steregushchiy class corvettes. The corvettes that have been commissioned so far with partial Redut systems that are not able to strike long-distance targets. It looks like the Russian military is now facing a choice regarding how long it is willing to wait to commission the already long-delayed first ship of the Admiral Gorshkov frigate class. So far, the Defense Ministry has not been willing to commission the frigate without a fully functional air defense system, though this may change as the delays grow longer.