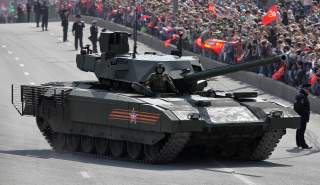 Russia’s new state armament plan, which will run from 2018 to 2027, refocuses the Kremlin’s defense spending on its ground forces.

In the previous plan, which runs from 2011 to 2020, the Kremlin had focused heavily on reviving the Russian Navy. Given Moscow’s recent experiences in Ukraine and the fact that Russia is, at the end of the day, a Eurasian land power, the shift makes sense. In more practical terms, as Center for Naval Analyses senior research scientist Dmitry Gorenburg notes, Russia’s new armored combat vehicles are now almost ready for serial production.

“This is in part due to Russia’s experience in Ukraine leading to an increased perception that ground forces may be needed in future conflicts, but mostly the result of new armored vehicle and tank designs being ready for serial production,” Gorenburg wrote in a new PONARS Policy Memo. “T-90 and T-14 Armata tanks, Kurganets-25 infantry fighting vehicles and Boomerang armored personnel carriers are all expected to enter the force over the next eight years, though numbers of some items such as Armata tanks may be limited due to their high cost of production.”

Additionally, the Russia will continue to produce new artillery and missile systems to replace legacy Soviet armaments such as the Msta self-propelled gun with the new Koalitsiya. However, while modernization continues apace with the Russian Ground Forces receiving new intelligence, surveillance and reconnaissance systems as well as new electronic warfare systems, not everything is going well. Russia’s efforts to introduce network centric warfare are running behind schedule.

“There are more problems with tactical automated control systems for the ground forces. Originally expected to be deployed to 40 brigades by 2020, these remain in field-testing in a single division,” Gorenburg wrote. “Reports indicate that the military has mixed feelings about the system and may decide that it needs improvement before it can be widely adopted. In that case, the development of network-centric warfare capabilities may be delayed beyond 2027.”

Overall, the Russian military is powerful enough to conventionally deter all of its neighbors in the post-Soviet space. However, the Kremlin still has to rely on nuclear weapons to deter China and NATO.

“In terms of impact on military capabilities, Russia is already strong enough to defend itself in a conventional war against any adversary and to defeat any neighboring state other than China,” Gorenburg wrote. “New procurement will thus be targeted at keeping pace with technological improvements made by its peer competitors (NATO member states and China).”

Thus, while the pace remains uneven, Russia is continuing to catch up, but it will remain behind the United States and possibly China in certain areas.