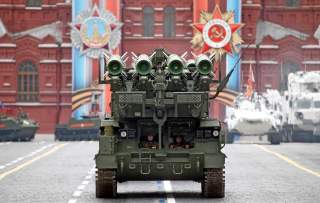 The Russian Ground Forces have taken delivery of the first batch of modernized 2C4 Tulip self-propelled 240mm mortars. The 1960s-era weapons were upgraded with new datalinks, communications gear and fire control systems. Russia eventually hopes to modernize all 500 of the vehicles it has in storage.

“In the course of deep modernization, modern control and communication facilities are installed in the combat vehicles,” reads a Russian Ministry of Defense statement.

“Before being sent to the troops, all of the examples were inspected under the supervision of military officers.”

Though the 2C4 has a nuclear mission in the past, it is primarily an infantry support weapon designed to destroy fortified positions.

“It had a nuclear mission, but realistically this is a heavy mortar for destroying fixed positions,” Mike Kofman, a research scientist at the Center for Naval Analyses specializing in Russian military affairs, told The National Interest.

“Its main advantage is that it can bring a very high explosive mortar round to the fight from a distinctly advantageous angle of attack.”

Modernizing an existing weapon is cheaper than building an entirely new vehicle to so the same job.

“Russia is upgrading these heavy mortars and probably taking them back from the reserves to active service,” Vasily Kashin, a senior fellow at the Center for Comprehensive European and International Studies at Moscow’s Higher School of Economics told The National Interest.

“It’s a very powerful and effective weapon which can be equipped with guided munitions— it had one in the past. I do not think we have nuclear ammo for them anymore.”

“I'm skeptical that much of a PGM [precision guided munitions] stockpile remains for this mortar system.”

Though the PGM stockpile for the 2C4 240mm gun might have been diminished in the aftermath of the collapse of the Soviet Union, the vehicles’ new fire-control system will allow for newer and better ammunition to used. “Now they have upgraded the fire control system,” Kashin said.

“Which will give it better accuracy at longer range and this makes it a most powerful field artillery system—although with relatively short range.”

Though the 2C4 was originally developed as a nuclear-capable weapon, it is doubtful that the Kremlin would ever use that capability again. There are far better ways to deliver a nuclear weapon in the modern-era that were not available in the 1960s when the Tulip was developed.

“I'm skeptical that any operationally assigned nuclear warheads remain for this system, or that the crew are still trained for nuclear delivery,” Kofman said. “Lets remember that this was really a creature of 1960s and 1970s when everything was nuclear.”

As Kofman noted, nuclear capability required more than just the physical ability to launch a nuclear weapon. “To have a nuclear mission you need to have the command and control, training, etc. that would allow you to do nuclear release,” Kofman said.

As such, the Tulip is no longer a nuclear weapons platform, but it should be a capable re-addition to the Russian Ground Forces.