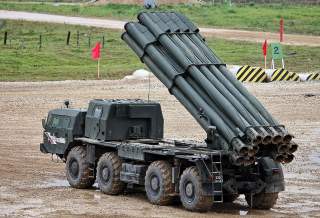 Russia has developed a new artillery-launched small unmanned aerial vehicle (UAV) that it is offering for export.

Under the Russian concept, the UAV would be launched via a 300mm rocket shot from a Smerch Multiple Launch Rocket System (MLRS) at ranges of roughly 90 kilometers. Once the rocket is over the target area, the drone is released at a height of 500m. The aircraft has an endurance of 20 minutes and can survey area of approximately 25 square kilometers.

“Technologically, at our own expense, we have already carried out such work,” Nikolai Makarovets, general designer for NPO-Splav told the TASS news agency. “We do not hide the hope that we will have customers in the near future.”

Researcher Sam Bendett at CNA Corporation, who specializes in Russian military affairs, said that the new system—which TASS did not name in its report—is inline with current Russian unmanned systems development.

“This type of UAV development is in line with Russia's diverse development of unmanned systems, from small tactical to large, weaponized platforms,” Bendett said. “This is directed at export markets. The Russians have been working on integrating UAVs into existing artillery systems for at least a decade.”

The new UAV is currently being developed for export, but it won’t be used by the Kremlin’s own forces. The Russian military is currently developing concepts for how exactly it will develop and integrate unmanned systems into its order of battle.

However, that being said, it is possible that Russian forces will eventually adopt this new system for their own use at some later date—but not right now. “At this point, there are no official orders for the Russian military—that doesn't mean it won’t change in the near future,” Bendett said.

The development of this new novel Russian UAV is a harbinger of the future. Russia is investing heavily in unmanned system to make up for its current technological deficit in this arena. Moscow has the technical skills to make that happen, the real question will be if Russia has the financial wherewithal to meet its ambitions.