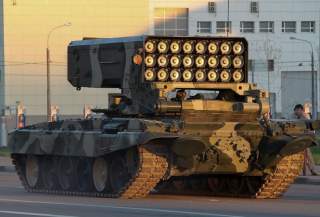 The Russian army is literally bringing its big guns to the war in Syria. U.S. military analysts said the decision to add artillery to the battlefield indicates a number of key developments, including the Kremlin’s growing influence in planning and executing Syrian military operations.

It could be a sign that Russia is dedicated to a conventional ground war—not just air strikes—in support of Syrian leader Bashar Al Assad, a staunch ally long supported by Moscow.

Since at least October, Russia fielded heavy artillery units near the cities of Homs and Hama, pounding targets there, according to a top U.S. State Department official. However, most of Russia’s firepower was at Latakia air base in western Syria until recently.

The Russian decision to move artillery to the front lines is a newer development. Officially, Moscow denies that it has ground forces engaged in military operations in Syria.

There’s certainly Russian influence within the Syrian army . . . and lots of guns.

Gen. Ali Ayoub, the Syrian army’s chief of staff, made a brief televised statement last month declaring the launch of a broad ground offensive that would be coordinated with Russia’s air campaign. He said the attack would include newly formed ground units including a “4th Assault Corps.”

The article quoted the pro-Hezbollah Al Hadath News. “The (Syrian) forward forces are supported by mortar cover and artillery regiments behind the support lines, as well as aerial cover from the Russian Sukhois,” Al Hadathstated.

“The Syrian army surge is proof of a new tactical military model, spiced with Russian flavors and led by the Sukhois from above, and which also includes greater use of artillery batteries,” the article continued.

According to OE Watch, there is conflicting information about the composition and manpower the 4th Assault Corps.  But its formation could herald a new direction for the Syrian military and its battle against anti-Assad rebels, including a shift toward reliance on conventional forces and artillery.

Russian military doctrine places far more emphasis on artillery than Western armies. In Ukraine, both Kiev and Kremlin-backed separatists make liberal use of artillery owing in part to their shared Soviet lineage.

Before the war in Syria, Assad’s howitzer arsenal was universally Soviet and Russian in origin. The Syrian army could depend on thousands of static and self-propelled guns. Since the conflict, Moscow has further beefed up Assad’s artillery with more advanced 152-millimeter MTSA-B guns, BM-27 Uragan and BM-30 Smerch rocket launchers.

“Due to the Syrian army’s strong reliance upon artillery, it is unsurprisingly that providing artillery assets is one way that Russia is attempting to bolster the Assad regime,” OE Watch noted. “Perhaps what is surprising is the types of artillery systems that are being provided.”

The deadliest of all may be the TOS-1A Solnitsa rocket launcher, which was spotted on video launching its warheads in Latakia. Mounted on a T-72 tank chassis, the TOS-1A can fire 30 220-millimeter thermobaric or incendiary rockets in a single salvo.

“The resultant explosion—which is usually much larger than an equivalent weight of conventional ordnance—creates a massive high temperature blast and a high-pressure shock wave,” Dave Majumdar wrote at The National Interest. “Those who are in the affected area—who are not immediately incinerated—die when the overpressure destroys their lungs.”

In Syria, the increased use of artillery could also indicate a shift away from military operations organized around insurgent forces recruited by Iran to a different military model that relies on Russian organization.

“Moscow is convinced of the need to strengthen conventional Syrian military forces and institutions and decrease the role of militias and the regime’s dependence on Iran,” journalist Ibahim Hamidi wrote in Al Hayat, one of the mostly widely read Arab newspapers in the region.

One Russian military analyst believes the renewed emphasis on artillery made a major difference in the fight against anti-Assad rebels.

In a recent interview on a Russian news program, Konstantin Syvkov said more than 300 artillery pieces concentrated on a half-mile line outside of Hama produced a so-called “fire wave” that greatly aided the Syrian offensive at first. “This method consumes a lot of ammunition, but it is very effective in getting through fortifications,” Syvkov said. “This allowed the breakthrough via the enemy defenses.”

The biggest problem was the Syrians ran out of ammunition, including artillery shells supplied by the Russians, he said.

Reuters also recently reported that Russia might have at least one artillery brigade armed with howitzers operating in an area between the cities of Homs and Damascus.

Russian state television footage of a briefing at the defense ministry headquarters on November 18 for President Vladimir Putin briefly showed a map that revealed the position of the Russian army’s 120th Artillery Brigade, according to a sharp-eyed military affairs blogger who spotted the position pinpointed on the chart.

In response to the claim, Kremlin spokesman Dmitry Peskov said, “In Syria there is a technical contingent linked with carrying out the Russian air force operation. There are no ground forces there and Russian soldiers are not carrying out a ground operation. The president has said that many times.”

Russia has conducted air strikes in Syria since September 30, including hundreds of attacks by fighter-bombers and missiles. Moscow insists it is hitting Islamic State targets as part of its anti-terrorism operation.

However, U.S. officials say that up to 90 percent of Russia’s targets are so-called moderate rebel groups that oppose the Assad government, including some that have been trained and supplied with arms by the United States.

Paul Richard Huard is a contributing writer, and Robert Beckhusen is managing editor, at War is Boring, where this article first appeared.