Russia's Big Military Buildup: Why Is America So Shocked? 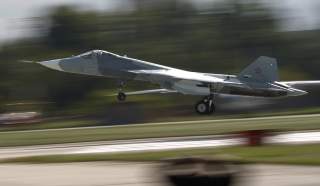 American defense officials are not surprised by Russian President Vladimir Putin’s March 1 speech that highlighted a host of new strategic nuclear weapons that the Kremlin is developing to overcome U.S. missile defenses. Indeed, Russian officials have talked openly about most the capabilities Putin mentioned in Russian language media for years.

“Certainly, President Putin’s remarks yesterday were very noteworthy,” John C. Rood, Under Secretary of Defense for Policy, told an audience at the Center for Strategic and International Studies in Washington on March 1. “But they’re not the only remarks that Russian officials have made in the public domain in recent years.”

“Most of our commentators don’t read foreign media sources still, and so when you look through some of the Russian language media you do see a much greater prevalence of these kinds of comments,” Rood said.

“And so while President Putin certainly gave a very full-throated explanation, I think there were elements of his comments that have been present for some time in various places and different comments that he and others have made before. So I was not surprised by much of the content of that.”

What is noteworthy is that the bilateral relationship between Russia and the United States is clearly on a downward trajectory.

“It is concerning the direction that’s going on in Russia, certainly, the direction of the country, and a number of us over the years have worked to find ways to build a closer relationship between the United States and Russia,” Rood said. “But I think, as our national security strategy and the national defense strategy said, we’re in an era of great power competition again and Russia has clearly chosen that as an approach. A number of the capabilities that President Putin talked about and an openness in talking about them being oriented at the United States and oriented at the United States and our allies is very noteworthy.”

Rood noted that Russian military exercises—particularly nuclear ones—explicitly identify the United States and the NATO alliance as the enemy.

“Some of the large-scale Russian exercises that have been conducted that identify NATO and the United States as the – that which is being exercised against is certainly another indicator of concern,” Rood said. “And then we do see capabilities being developed and maintained by the Russians that concern us as well. And so I think we just have to take that into account in terms of the orientation of the country, the demonstrating of capabilities, seeing capabilities developed or maintained as we develop our doctrine. And Russian nuclear doctrine continues to emphasize the use of nuclear weapons in a way that U.S. doctrine in the past has not, and some of the moves that we have taken Russia has gone in the opposite direction with respect to, for instance, the size of their so-called nonstrategic nuclear forces.”

Rood noted that the United States has been concerned with Russian nuclear doctrine before Putin’s speech.

“I would say our concern about Russia’s capabilities, our concern about Russia’s direction and some of the statements that have been made in the past about the role of nuclear weapons predated President Putin’s speech yesterday,” Rood said. “I personally was not surprised to see a number of his comments in that speech. I think it’s, broadly, consistent with things that have been stated before from Russian officials. That doesn’t mean I welcome it or that it was necessarily the message that we would have liked to have received. But I think it’s, broadly, consistent with things that the Russian government has said in the past.”