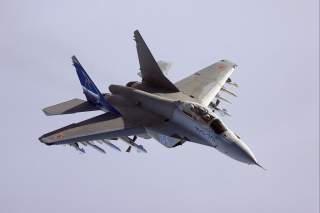 Russian President Vladimir Putin held a video-conference with Russian Aircraft Corporation MiG (RSK-MiG) at the Kremlin on Jan. 26 to mark the start of flight-testing for the new Mikoyan MiG-35 Fulcrum-F. An advanced derivative of the venerable Soviet-era MiG-29, the MiG-35 incorporates new features such as three-dimensional thrust-vectoring and an active electronically scanned array radar.

“Let me start by congratulating you on this important event – the start of our new MiG-35 light fighter plane’s flight tests,” Putin said according to a transcript released by the Kremlin. “I hope very much that this fighter will contribute substantially to bolstering our Air Force and Aerospace Forces. The plane also has good export potential, given that more than 30 countries actively operate another model, the MiG-29.”

Test pilot Mikhail Belyayev, who was one of the aviators who took to the air in the new Fulcrum, offered a glowing review of the MiG-35—certainly not a surprise.

“As part of the MiG-35UB trial program, a crew of Russian Aircraft Corporation MiG – test pilots Mikhail Belyayev and Stanislav Gorbunov – have performed a flight to demonstrate its stability, controllability and maneuverability characteristics,” Belyayev said. “The objectives and results of the flight have been fully accomplished. All on-board systems worked properly. The engine and the integrated aircraft control system worked properly. The crew’s evaluation is positive. The quantitative evaluation will be made following the processing and analysis of the materials received from flight recording equipment.”

In his report to Putin, United Aircraft Corporation director Yury Slyusar, extolled the features of the new MiG-29 derivative. While the airframe is similar to the original MiG-29, the MiG-35 is practically a new design under the hood.

“The plane’s excellent results were achieved through using a new on-board defense system and new infrared search and track,” Slyusar said. “The plane’s radar visibility has been reduced by a several-fold factor. We have increased from six to eight the number of suspension points, which will make it possible to use current and future airborne weapons systems, including laser weapons. The plane’s range has been more than doubled. This was achieved through bigger capacity of internal tanks and mid-air refueling functions, which can be done in tanker regime with aircraft of the same family too. All systems used in the MiG-35 are Russian designed and made, including the newest systems – the inertial system and helmet-mounted targeting system.”

More importantly, the new jet will incorporate Russia’s first operational fighter-mounted active electronically scanned array radar—called the Zhuk-MA. The radar is able to track fighter-sized targets at ranges greater than 85 nautical miles. “It can follow from 10 to 30 targets at once, and can operate over land or sea. This is a genuinely unique and promising aircraft, 4++, you could say, very close to being fifth generation,” Putin noted during the conversation.

RSK-MiG—which falls under the aegis of the United Aircraft Corporation alongside arch-rival Sukhoi—hopes to recapture some the Mikoyan design bureau’s old glory with the new advanced MiG-29 derivative. RSK-MiG’s Fulcrum product line has been overshadowed by Sukhoi’s larger and more capable Flanker series in the years since the collapse of the Soviet Union.

“We have created a multi-spectrum system that was integrated into the armament system and additionally installed aboard the MiG-35, and along with other systems, we have developed the Generation 4++ complex,” United Aircraft Corporation general designer and vice president for innovations Sergei Korotkov told Putin. “ We hope that after the trials, the Defense Ministry will buy this machine and that foreign customers will also come to sign contracts with us.”

Only time will tell if the MiG-35 will be successful, but the Fulcrum-F might be the RSK-MiG’s last hope of regaining some of its lost market share on the international fighter market.